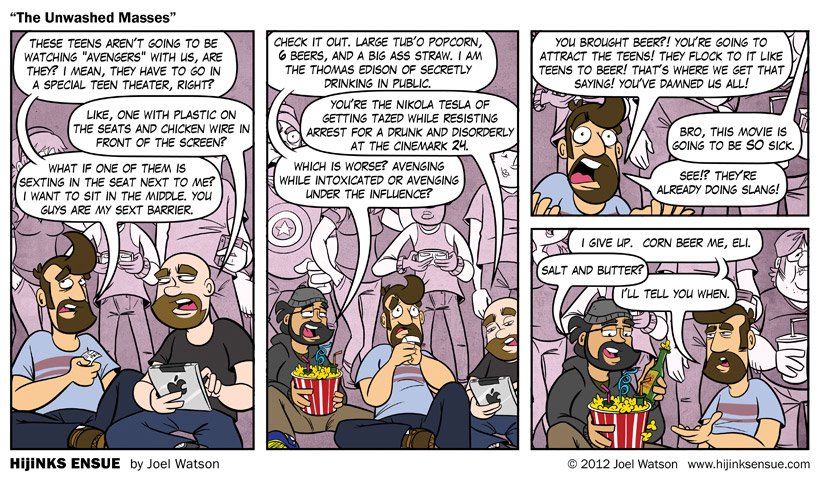 I’m doing something different with the comics starting this week. A bit of an experiment, or rather a continuation of The Experiment. I could certainly use your feedback and your support. Please take a few minutes and READ MORE here.

The thing I hate the most about going to movies in the theater, especially popular ones, is the people. Specifically the teens. I HATE YOU TEENS! I HATE YOUR STUPID PRETTY BUT STILL AWKWARD FACES! I am an adult, and as such I believe I have a right to live a life totally devoid of teens. I am all for teen segregation. They already have their own schools. Why not their own restaurants and movie theaters?

“George Hurt You” shirts are in the store!!! Let the healing begin.

There was a kid in line behind me bitching THE ENTIRE TIME about how “fucking retarded” this particular movie theater was because he stood in the wrong line for an hour and missed his showing of Avengers and no one did anything to stop him from doing such an incredibly stupid thing. To be fair, the theater was so incredibly packed that it was difficult to tell which line was for which showing. This kid, however, allowed himself to stay in the wrong line for over an hour PAST the start time printed on his ticket. Movies do not start an hour late. They are not concerts. Iron Man and The Hulk are not getting high in the green room while Thor gets his Mjolnir hammered by some Asgardian groupie. At one point he called his mom to complain that he was going to be late getting home because of how stupid the theater was and how he doesn’t want to just leave because he already spent like $20 (certainly hers, not his) on snacks. I should not have to endure such teenage dumbness just in order to see a film on opening weekend. Can I pay $5 more to sit in the Adults Only theater? Does that theater serve booze? Who wants to invest in this idea? It’s quite possibly the best idea anyone has ever had.

So what about The Avengers? Quite simply, it was a triumph. It rivals Iron Man and Spider-Man 2 for the title of “Best Super Hero Movie Of All Time” (I do not count The Dark Knight in this category because I just don’t. It’s its own thing.) Without question it is certainly the best Thor movie, the best Hulk movie, the best Captain America movie and the best Iron Man sequel produced to date. And the Hulk… Jesus the Hulk. I have NEVER liked any incarnation of the Hulk in any form of media, filmed, televised or printed. Yet give this character to Joss Whedon and he uses him with such precision and skill that he steals not just every scene he’s in, but quite possibly the entire movie. The use the words “the Hulk” and “subtlety” in the same sentence seems contradictory, but that’s what it was. As a matter of fact, every single thing I loved about The Avengers stemmed from that Whedonesque subtlety that I’ve grown to love so well. A throw away line here that is anything but a throw away, a bit of body language that goes almost unnoticed but tells an entire story. God dammit, Hollywood! Do you see now what we’ve been trying to tell you for a decade?

I want to write a thesis deconstructing the ways in which Michael Bay and Joss Whedon destroy downtown Manhattan. The ham fisted wrecking ball vs. the artist with the soft touch. In the end, the city is still rubble, but the way it got there could not be more disperate. I am not exaggerating when I say I fell asleep during the climactic battle of Transformer 3.  I honestly could not tell what was happening on the screen for the last half hour of the movie and I just lost interest in fighting the boredom. The last 30 minutes of The Avengers, however, might be the most fun I have ever had in a movie theater. Oh, and did I mention The Hulk? HULKHULKHULKHULKHULK HULLLLLLLLLLLLK!!! Seriously, it was that good.

COMMENTERS: Post your thoughts on The Avengers in the comments. SPOILERS MUST MUST MUST BE TAGGED or your comments will be deleted and you will be banned from commenting. DO NOT RUIN THIS MOVIE FOR ANYONE.

Posted in Uncategorized and tagged comic book movies, marvel comics, misanthropy, movies, Storyline: I Will Avenger You. Will You Avenger Me?, super hero movies, super heroes, teens, the avengers.