Calgary is a weird town. Everything is pretty nice and clean and Canadian and there is a series of above ground tubes that you can navigate most of downtown with to avoid actually being on the street, but pretty much everything closes at sundown and NOTHING is open on Sunday. Visting cartoonists need to drink on Sunday too, Calgary! I don’t think Canadian Jesus will mind. Incidentally, Canadian Jesus is the same as American Jesus (the one true Jesus) except he does some occasional ice fishing and pays too much for his mobile data plan. 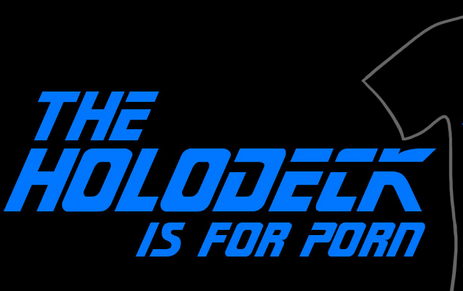 If you are a long time reader of HijiNKS ENSUE, you probably know what Star Trek: TNG means to me. It was more than a show. It was a friend and a guide when I was a confused, ignored and bullied little boy. I learned so much about respect (how to earn and give it), problem solving, avoiding violence at all costs, but still not letting anyone push me around, and what the future can (and should) be if we aren’t too childish, greedy and stupid to get ourselves there. I very large part of who I am, and how I view the world is based on the lessons I learned from TNG. So, with that in mind, I’m sure you can gauge how much it meant to me to be present at the 25th Anniversary reunion of the TNG cast at the Calgary Expo. It was nothing short of magical.

As the cast members recollected and joked with each other, I quickly realized that they were not performing; not putting on a show, but instead they were just catching up. It was as if 8000 grinning geeks were not in the room with them as they told stories, and reminisced. We were scores and scores of flies on the wall to the greatest geek conversation we could have hoped to hear. That is not to say they ignored the audience or seemed in anyway ungrateful for our contribution to their legacy (quite the contrary, actually). It’s just that they almost seemed lost in their affection for each other. Patrick Stewart in particular spent most of the evening facing not the audience, but turned to face his friends. If asked a question directly, he always had to look for the mic and pick it up because he had long since put it down in order to pay closer attention to what Frakes, Wheaton or Sirtis were saying. It seemed like the whole thing was sponsored and film by Space in Canada, so I am hopeful that the discussion will be broadcast in some fashion soon. I cannot stress enough how perfect a cap that evening was to 25 years (20 for me) of Star Trek: TNG fandom. I must thank Sohmer and our Calgary Expo volunteers for getting me the ticket. It’s one of those things that I wasn’t going to let myself splurge on, but knowing now what I would have missed… let’s just say I would have regretted it.

Speaking of splurging, when I saw that an entire cast photo with the TNG crew was available for $500 and up to six people were allowed to split the cost, I immediately grabbed five friends and got ready to do some convincing. Turns out this is a proposition that, among Star Trek fans, requires little to no convincing. Thanks again to our fantastic volunteers, we were able to score some line-skipping passes which meant we only had to wait for about an hour instead of three to four. Now I normally am not one for photo-ops or impersonal signings at events where celebrities are present. I much prefer a casual encounter, a brief exchange or words, etc. But this was potentially the last time these people were going to be in the same room… forever! I was already mentally clearing family photos off the mantle to make room for this picture. The photo-op itself took all of 15 seconds. Honestly it wasn’t even enough time to make eye contact with the whole crew. We were in, somehow I ended up next to the Captain (in Troi’s spot), they snapped the pic and we were out. As we left I heard Wil say, “Everyone wave to my friend Joel!” That was, uhh… pretty fucking rad. And as you can see, the picture turned out amazing! Look at that grin on Patrick Stewart! I’m going to have it tattooed over my own face so I can see it every time I look in the mirror. Damn, that was a good day.

COMMENTERS: What events go on your “life flashing before my eyes” hit list? What awesome things have happened to you that made you say “I WAS THERE! I ACTUALLY DID THAT!“?