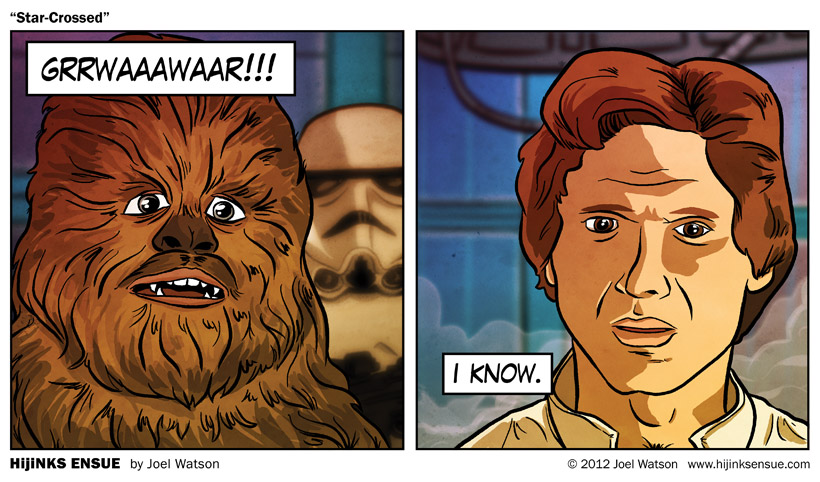 UPDATE: This comic is totally a shirt now!!!
Han And Chewie “I Know” shirts are live at Sharksplode! 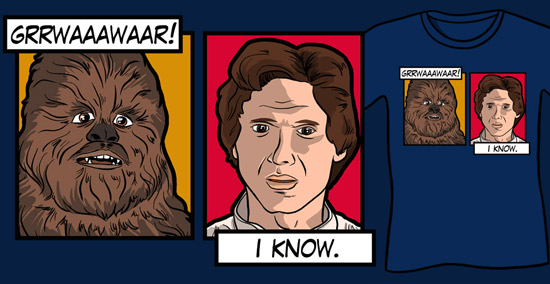 Notice how every other alien’s dialog is subtitled in Star Wars except for Chewie’s? That’s because every word out of his mouth was a declaration of love, and only one person can understand the truth in his heart. He was more than Han Solo’s co-pilot. He was his co-partner. Of course the films DID take place “a long time ago,” so some predjudice is to be expected. Why do you think Chewie didn’t get a medal at the end of A New Hope? Interstellar bigotry, that’s why! Sure, they called themselves “Rebels,” but more than the Empire they are rebelling against love.

Basically Brokeback Mountain is a modern day retelling of Star Wars. Two cowboys (smugglers) hide their true feelings by assuming “normal” lives except for on their long, secluded retreats (deep space runs in the Falcon), and even go as far as to marry women they don’t really love (Leia and Malla) to keep up appearances for fear of reprisal from their community (the Rebels). It really is a tragic story of love, denial and persecution. Also there’s this winy kid who gets his hand cut off. Spoilers.

COMMENTERS: Doesn’t the Star Wars Trilogy make SO MUCH MORE sense now? If you agree with my groundbreaking new understanding of the greatest film love story of all time, feel free to elaborate in the comments. What were the clues? Why was Han really so anxious to get his reward and get back to the Falcon? He wanted to start a nestegg for he and Chewie. Why was he so apprehensive about giving the Falcon to Lando? Because that was the only place he was able to be himself with his partner!