Warning: array_merge(): Expected parameter 1 to be an array, string given in /home/hijinks/public_html/wp-content/plugins/seriously-simple-podcasting/php/classes/controllers/class-frontend-controller.php on line 728
 scifi – HijiNKS ENSUE

I enjoy me some Nerdist Podcast, so while listening to Chris Hardwick lament about a topsy turvy world where no one but himself knew what cottage cheese was, I was inspired to make this comic. WARNING: This comic makes MUCH more sense if  you have listened to Nerdist Podcast Episode #114, which is why it’s posted down here and not up in the main comic area. 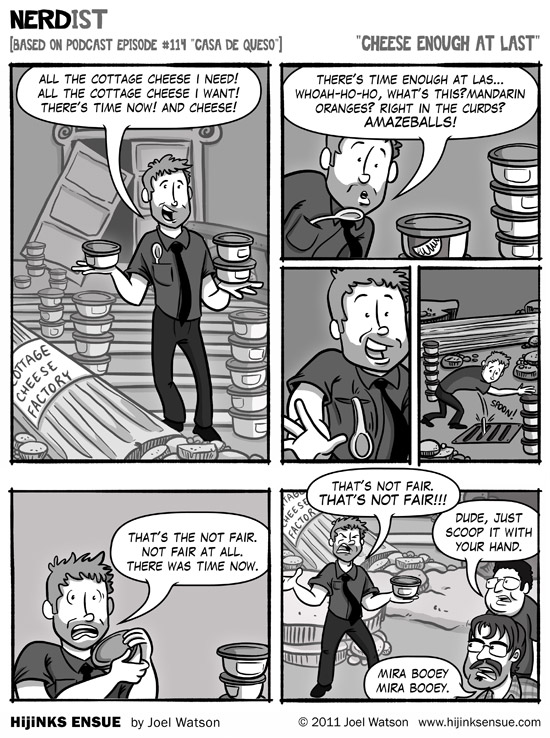 If you are new to the site and you dig this comic, you might like some more comics about Doctor Who, Apple, Tech, Sci-Fi, featuring Chris Hardwick or our mutual friend Wil Wheaton. Also, the HIJINKS ENSUE STORE is a place where you can buy nerdy T-shirts and stuff.

Today’s comic inspired me to make a new shirt. Pick one up in the store if you like.  If you frequent other SciFi blogs or forums, feel free to link them to this post or to the store.

[youtube:http://www.youtube.com/watch?v=OZ8AKEHTAGs]
Not to mention underwhelming.
“In space, no one can hear you weld!”

i09.com posted a story about a gallery in LA featuring new twists on classic Stan Lee characters. The Fantastic Four remind me of the outro sequence from The Incredibles. 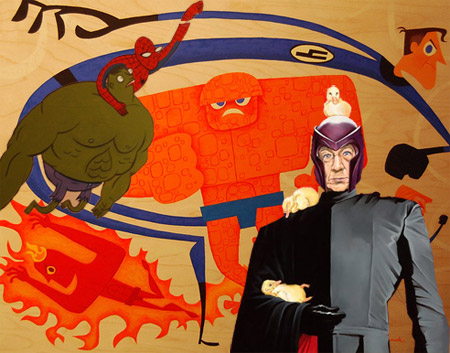 (this mashup is NOT one of the actual pieces. It’s like 3 of them blendered)

Cally Tyrol is the fifth and final Cylon.

There. I said it. The gauntlet is thrown. What’re ya gonna do? Nothin. Deal with it.

Check out this “Last Cylon Supper” pic and blurb from io9.com (Gawker’s new scifi blog). I wonder if they served toast. I read the clues from Ron D. Moore and I’ve interpreted them thusly: The final-fifth is NOT in that photo (Cally is NOT in that photo), and he refers to Cally and Chief Tyrol’s baby as “seeming to be the 2nd human Cylon hybrid.” There’s your money shot. He SEEMS to be but he’s not. He’s the first biological Cylon baby.

Season four won’t premier until April so we probably won’t get confirmation on this for quite some time. Go ahead, and place your bets in the comments. I’m sticking with my theory (at least until it’s proven completely and utterly wrong).