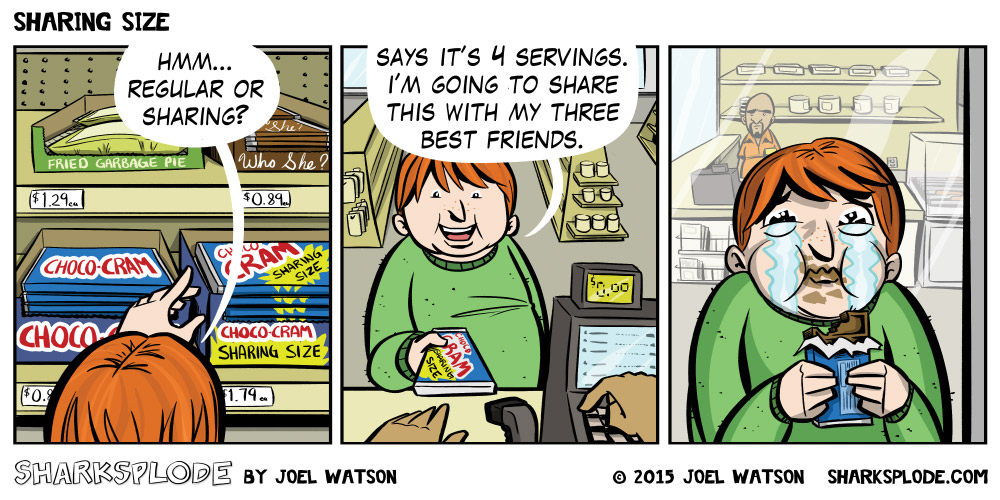 THIS ISN’T AN AUTOBIOGRAPHICAL COMIC ABOUT ME! SHUT UP! NO IT ISN’T! I’M NOT UGLY CRYING YOU’RE UGLY CRYING! YOU’RE THE ONE! YOOOOOOOU’RE THEEEEEEE OOOOOOOOONE!!! *ugly cries into a Nestle Cookies & Cream bar for 20 minutes

Remember like 5-10 years ago when a big bag of M&M’s was just a BIG BAG of M&M’s? It was just an option. A choice. Do I want some M&M’s or do I want some-and-a-half M&M’s? Now the slightly bigger bag of M&M’s has all this preloaded judgement and shame. First of all, it provides the nutritional information for one serving, then goes on to the describe the bag as something like two and a half servings. A bit of nearly impossible math later and you feel bad for wanting to eat 28 M&M’s instead of 11. Then, as the panels above suggest, the bag is labeled “Sharing Size.” This is a masterful one-two punch of shame. First, it implies that only a gross garbage monster would eat the entire bag in one sitting. THEN it goes on to imply that only a gross garbage monster with no friends would eat ANY amount of M&M’s alone! This bag isn’t for you! It’s for you AND your friends! Call them up, “Hey dudes! You got plans for tonight? NOT ANY MORE! I’ve got a Nestle Crunch bar that breaks into 4 pieces and explicitly states that it is to be shared with my buddies! You’ll bring the beer and the music? SOUNDS LIKE A FUCKING CANDY BAR PARTY!!!”

“Sharing Size” is such a horseshit excuse. It’s a smokescreen; a cop-out that absolves the candy company from any wrong doing if you eat a million candy bars and die in a chocolate ditch. “We told him to share. Did he heed our words?” Big candy bars used to be called “King Size.” Some still carry this nomenclature and I prefer it by far. It’s the exact opposite of “Sharing Size.” “King Size” implies that I am the sole RULER of this candy bar, and under no obligation to parse it out to the peasants groveling in their own squalor in the mucky fields far beneath the chocolate tower that contains my delicious throne. “Oh, the serfs are unhappy, you say? Let them eat SHIT, cuz the candy is for THE KING! It says so right on the wrapper.”