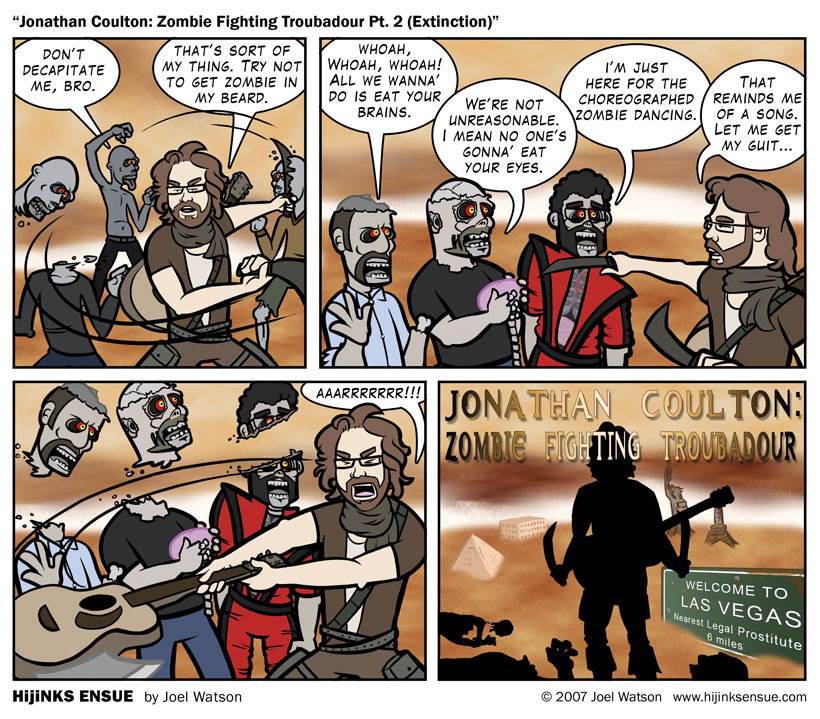 Amazingly enough, there actually is a part 2 to last week’s edition of “Jonathan Coulton: Vampire Slayer Zombie Fighting Troubadour.” First thing’s first. The JoCo show last Wednesday at Club Dada here in Dallas was a blast. Jonathan’s performance was fantastic. JoCo is quite different from most comedy/music acts. Jonathan’s songs seem to be about robots and squids and ruined ponies on the surface but you can tell the underlying emotion is real. It reminds me of a geek that is trying to tell a girl he loves her and all he can muster is a Buffy analogy. Also, I highly recommend Paul and Storm, who opened for Jonathan and backed him up on about 1/3 of his set. They were more or less straight comedy but their set killed.

Afterwards I gave Jonathan a print of the for “JC:ZFT” comic. He signed a copy of it for me and posed for a pic with Josh, my wife, Emily, and myself (as is evidenced below). 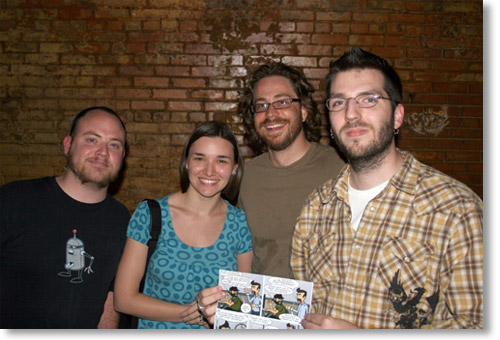 What a cool guy. Also, if you haven’t seen JoCo perform “Mr. Fancy Pants” live with his wearable-midi-trigger-contraption… then you haven’t seen that. And you should. Because it was entertaining. If you aren’t a JoCo fan at all and this comic made no sense, please go check out his music page and listen to “Re: Your Brains.” You’ll be smiling when it’s over.

Originally the comic wasn’t going to have anything to do with Resident Evil: Extinction, but Josh dragged us to it and I felt I had to get some kind of value for my $9. It’s my own fault for saying yes. Josh does this shit all the time. Somehow he got me to go to Pulse just by repeating, “It’s got Veronica Mars. It’s got Veronica Mars,” over and over. I didn’t even watch Veronica Mars! It’s as if he were to call and say, “Hey! I got this giant hammer to smash my scrotum to death with and I was thinking you might want to get in on this action.” And somehow I agree.

Today’s comic, much like the Original Star Wars Trilogy, was released in an incomplete state. It didn’t properly communicate my vision. I rarely go back and make changes unless there are mistakes, but this one just wasn’t all there. So take another look and see what you think. Maybe later I will release the original comic on a Director’s Cut DVD. But it will be a shitty laser disc transfer with 2 channel audio.