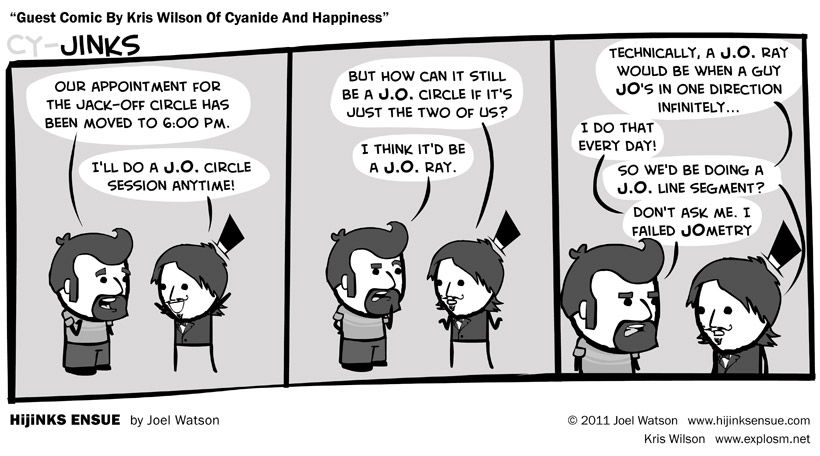 JoCo Cruise Crazy II Guest Week is stranded up on a desert island! I am surviving on the contents of the buffet trays that keep washing ashore and have constructed a rudimentary shelter out of David Willis. The good news is the drinks are now free. The bad news is the drinks are all sea water. Those of us that remain has formed a simple organizational hierarchy, but I fear for the safety of Piggy. I just don’t think he has what to takes to not be murdered. HEY A CRAB!

Sometime around 1997 Kris Wilson along with an elite group of boobies-obsessed preteens, middle aged engineers and Rupert Murdoch met in secret to write the original charter for the Internet. Kris was the one that decided on the “dot” in “.com” due to its ressemblance to both a dick hole and the dickhole-shaped birthmark he has on his dickhole. At only 15 years old, this dude was shaping the very web-o-tron that we live, work and prey on today. Was his early entry into the hall of eHeroes a case of child prodigy, lax parenting or both? The answer, like our collective innocence, is lost to the ages. The answer is also “both.”

There are few people on this planet whose company I enjoy more than Kris Wilson’s. And that is saying a lot considering he spells his name like a girl and he was born in Wyoming. We met at C2E2 2010 in Chicago and within moments we were singing karaoke’d Creed to a party of drunken bride’s-harpies. It was a fast friendship after that and an even faster, more furious courtship. I expect the court proceedings to be even more so 5ast and 5uriou5.

Kris is one of those guys that’s down for anything, ready to run with any joke premise no questions asked and would rather lift up those around him than bring them down or see them fail. These attributes are what has kept him alive all these centuries and what will make facing him in The Cartoonist Quickening all that much harder. Still, I shall have his head for my trophy belt. My belt of heads. It is impossible to sit down while wearing that thing.

He and his Explosm cohorts (one of which is on a boat with me right now! Hi Rob! Can you get me another rum punch? No? You’ve forgotten how to walk? Whale venom will do that to you.) are working on a TV pilot for Comedy Central right now. At least I’ll be able to say, “I knew him when…” and “Can I borrow like $40,000? I KNOW you got it man! I KNOW YOU GOT IT! YOU COCKSUCKER! THEY’RE GOING TO TAKE MY HANDS! MYYYY HAAAAAANDS!”

The above comic illustrates everything I love about being a self-employed cartoonist. The dialog comes straight from a BUSINESS EMAIL between me, Kris and a few others. BUSINESS. Like the stuff you get paid for. That kind of business. What?

COMMENTERS: What conversation, activity, or other whatever have you been the most shocked by (either positively or negatively) in a business setting? One time my old boss called me into his office to look at something that was wrong with his computer. When I got there he typed on his screen, “You can totally see down [female coworker]’s top from here. She keeps shaking her foot and making them bounce. I can’t get any work done. I don’t know what to do?”