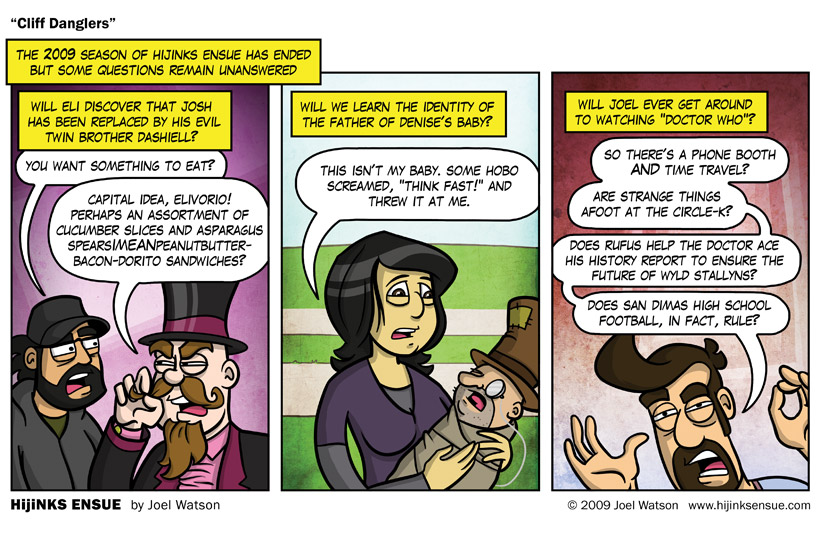 UDPATE: Yes, I know “Dr. Who” predates “Bill & Ted” by decades… that’s part of why I find the comparison amusing. #iloveexplainingthejoke

This is why I don’t do continuity. Because if there were stories in HE they would all go like this comic. Also I would never EVER tie up the loose ends. It would be like LOST but with fewer cast members and shorter hiatuses.

I spent 3 days trying to come up with something special for this comic since, not only was it the final comic of 2009, and the final comic of the decade but it was also the final comic of what will eventually be HE Book 2. I’m going to post the alternate ideas for the “HE season finale” in The Vault for those of you who have donated and have access.

We really shouldn’t be worried about how many times our little blue dirt ball rockets towards oblivion around an unfathomably large self sustaining explosion. One time? Ten Times? It doesn’t really matter when you consider that somewhere in the universe entire galaxies are colliding with each other. Now that’s a reason to reflect and reminisce. “Remember when we had a galaxy? Man, those were good times.”

Feel free to post your favorite/least favorite geek moments (TV, Movies, Your Own Life, Etc) of the last year or decade in the comments.