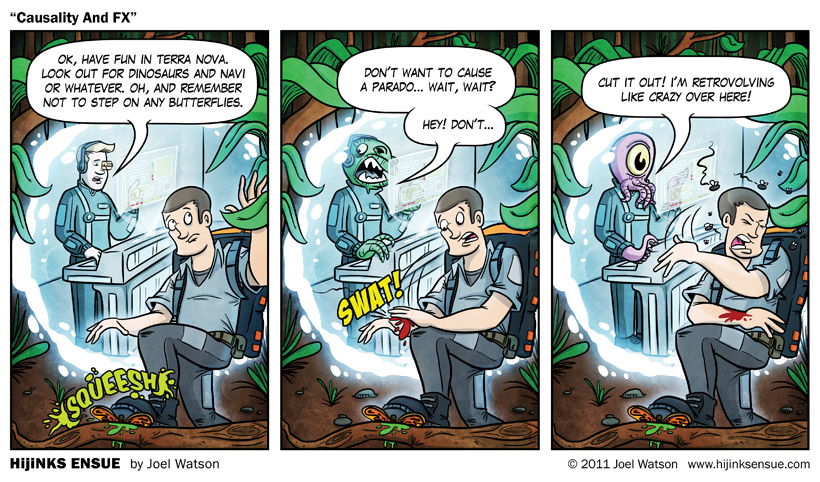 Before you jump up my ass, YES I know they wrote off the possibility of a paradox in the pilot of Terra Nova by saying the past they travel to is in an “alternate time stream.” More on why I think that’s bullshit later.

Ok, so I gave the Terra Nova pilot a shot. The short version is that it’s Jurassic Park meets Avatar with a little bit of Lost thrown in for good measure. There’s dinosaurs and humans juxtaposed, there’s escaping a dystopian Earth in favor of a hostile but majestic jungle environment and there’s “no matter what you were, you get a second chance in the past” to round out the premise. There are even a group of  “others” to add a little mayhem and mystery.

Let’s start with the shitty future humanity traps itself in. Fans of sci-fi will find nothing new about the present day future of Terra Nova. It’s all well trodden ground. Humanity destroys itself with greed, overpopulation and environmental devastation. The air sucks, the living quarters are tiny and only the most wealthy and connected don’t live on the brink of extinction. Through a coincidence, seemingly caused by parking two supercolliders next to each other, scientists discover a “fracture” to 85 million years in the past. A probe is sent through, assuming it will automatically show up somewhere in the present. When it doesn’t they determine this past is in a different time line, so it’s ripe for exploring, and settling and butterfly stepping on without fear of paradox… IN OUR UNIVERSE. What about the present of the parallel Earth whose past they are invading? Maybe they didn’t fuck up their planet. Maybe the first person who goes through that portal commits planetary genocide. Why is that not a concern?

Anyway, they decide the only future for humanity lies 85 million years in the past so they start sending settlers through the portal to establish a new colony. It isn’t explicitly stated, but I assume the idea is “Our Earth is fucked. Everyone on it is going to die. Screw those guys. The people in the past and their descendants are going to be the only humans to survive long term.” Seems a bit short-sighted. Why didn’t they just invest all that future know-how into a more advanced space program and work on terraforming and colonizing Mars? Oh… right. Because then they wouldn’t have a show where people get chased by dinosaurs.

The dinosaur effects are passable, but shockingly NOT up to snuff with the original Jurassic Park. How does that film keep aging so well? All in all, the 2 part pilot was rather enjoyable but rife with confusing, nit-picky plot holes and story difficulties that could prove too big to overcome without alienating the hardcore sci-fi fan (again, the “alternate time stream = go nuts, do whatever we want” thing will never stop bothering me). I will say the characters and the pacing are a DRASTIC improvement over Spielberg’s last genre TV outing Falling Skies. There was a decent dose of family drama, but it didn’t weigh the whole show down like it did on Falli… 7th Heaven + Aliens.

I will probably give Terra Nova at least a good 4-5 eps to show me what it’s got, though I find it nearly impossible to concentrate on the plot with all the Jurassic Park jokes I keep making while watching it. Every time General Avatar showed Main Character Cop/Dad a new area of the compound (especially his living quarters which looked suspiciously like a page out of the IKEA catalog), I couldn’t stop myself from blurting out “Spared no expense!”

COMMENTERS: Did you see Terra Nova? Any thoughts? [posting mine in a few minutes, check back and refresh]