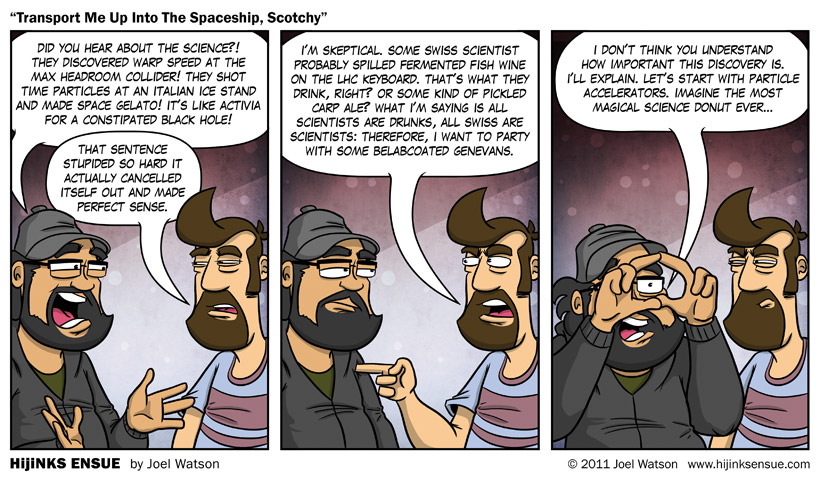 I know you can’t really use “Swiss” as a noun, but at least I didn’t just say, “some Swede.” I have a feeling the Swiss and the Swedes have a sort of GoBots/Transformers style rivalry. Like they probably came out at roughly the same time, but one of them (I’m not saying which one, but I think you know) was clearly superior in terms of marketing and originality. I also get the impression the Prime Minister of Switzerland is an enchanted  swan that occasionally takes human form to hand out pastries to good children. Or maybe that’s just Bjork. She’s from Iceland which is either near and very much like Switzerland or not at all. I think they both have ice hotels.

So it looks like physics as we know it might just be a bunch of crap. You see, these scientists at CERN have been shooting neutrinos (not to be confused with the pseudo new wave/punk rock aliens for Teenage Mutant Ninja Turtles) at Italy for some time (which seems like an act of war), and they appeared to be arriving shortly before they left. Well, not really, but they were appearing sooner than they should have. Sooner than light, in fact. Light shows up in Italy the the neutrinos are acting all casual, stretched out on the sofa, sipping a creme soda and being all, “Oh, hey light. I guess you finally decided to show up. I’ve been waiting for you for like 60 nanoseconds. I was about to call the police and make sure you hadn’t been murdered or whatever.”

I say all of that to A) Intimidate you with my obviously superior knowledge of science, and B) to say this: I guess we don’t really know anything about anything, and I find that kind of terrifying and exciting.

COMMENTERS: Do you believe the findings will hold up to scrutiny or be replicable? Do we need to start rewriting physics? Will this discovery finally get us to a world more like Star Trek? Can it please?