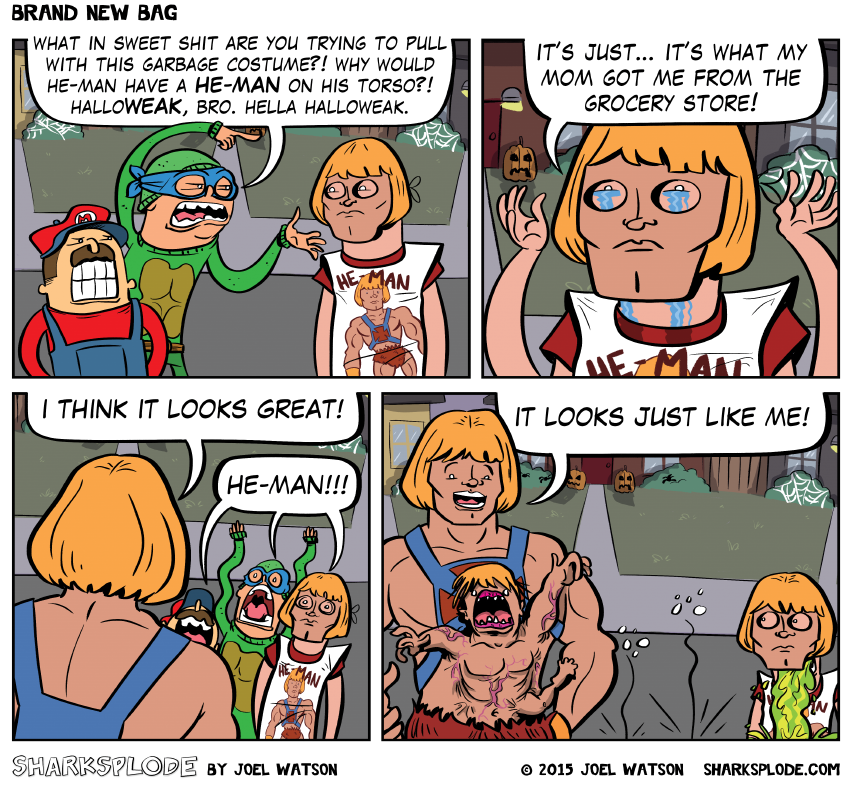 I pitched two ideas for my guest comic over at Cyanide & Happiness. This is the one they rejected.

If you’re under 30, you probably have no idea that for SEVERAL DECADES before you were born it was considered perfectly acceptable to wear a plastic mask of your favorite cartoon character, along with a trash bag (ACTUALLY A LITERAL TRASH BAG) featuring a full body picture of the same character as your Halloween costume. Not only was this considered acceptable Halloween attire for children, but it was an accepted business practice for companies to offer these “costumes” as their “best effort” in exchange for “actual money.”

Do you want A TON of bonus, extra and alternate comics?!  Then my Patreon is THE PLACE for you. Every little bit helps me continue to make a living, and is QUITE appreciated.

Now I walk through the costume aisles of Wal-Mart and Target and kid’s costumes have achieved near Hollywood levels of production value. There are muscle suits, led lights, articulated armor, sound FX… it’s only a matter of time before children go door to door wearing green body suits, and handing out augmented reality goggles that make the candy-giver see them as a 70 foot tall full CG dragon. Dad will stand to the side with a flame thrower and torch the neighbors bushes for increased special FX.

I wasn’t allowed to celebrate Halloween. We had the fundamentalist Christian alternative: HARVEST FESTIVAL. It’s EXACTLY like Halloween except you don’t get to Trick Or Treat and all the costumes are either animals, cowboys or Bible characters. I had a basic costume rotation each year of monkey, cowboy and… let’s say Noah. In retrospect I was just dressed like a modern day Muslim, but I had a burlap sack over my tunic. The 80’s were weird. One year I got a real screen quality ALF costume. It was my favorite thing ever and simultaneously the worst costume I ever had. The shag carpet full body suit made it 800 degrees and itched all to hell and the fur and latex mask was like a tight, rubbery panic prison for my face.

My wife and I enjoy helping our kid have a unique Halloween experience. She’s been Princess Leia, Boo from Monster’s Inc., a Backyardigan, Jessie from Toy Story, A Ghost, a Witch, Raven from Teen Titans (complete with a narrative adventure) and Hermione Granger. This year she’s going to be Amethyst from Steven Universe. I’ll post pics of that one after it’s all assembled.

UPDATE: Here’s a Tumblr post with all the Kiddo costumes so far.