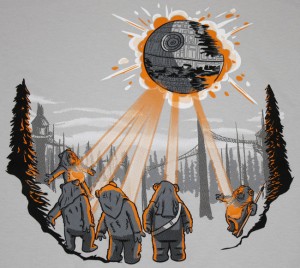 There are about 30 Ultimate Fancy Editions of HE Book 2 left and selling them ALL is super important in order for me to afford the full print run without having to go into the red. Order soon and you can still get your name in the book on the Fancy Bastard Wall of Fancy Fame. Once the final file goes to the printer (a few days, maybe more) that won’t be an option.

Just to clarify, when I say Midi-Chlorians I am, of course, referring to “Musical Instrument Digital Interface Chlorians.”

So either George Lucas recently Netflix’d Roland Emmerich’s 2012 and thought he was watching a documentary or he actually believes in the Mayan 2012ocalypse. Either way he’s a fool. A damned fool with a fleshy fanny pack strapped to his chin that he calls a neck. I assume it is either used to store nutrition for the long, harsh winters on Hoth or contains dozens of Admiral Ackbar action figures.

COMMENTERS: So what is Lucas up to? Is this just a ploy to sell a another special “Get It Before The End Of Days” edition of Star Wars on Blu-Ray? If he really does believe this horsecockery, what is his escape plan? Carbon freeze to ride out doomsday? Escape to Dagobah? Post your theories below!