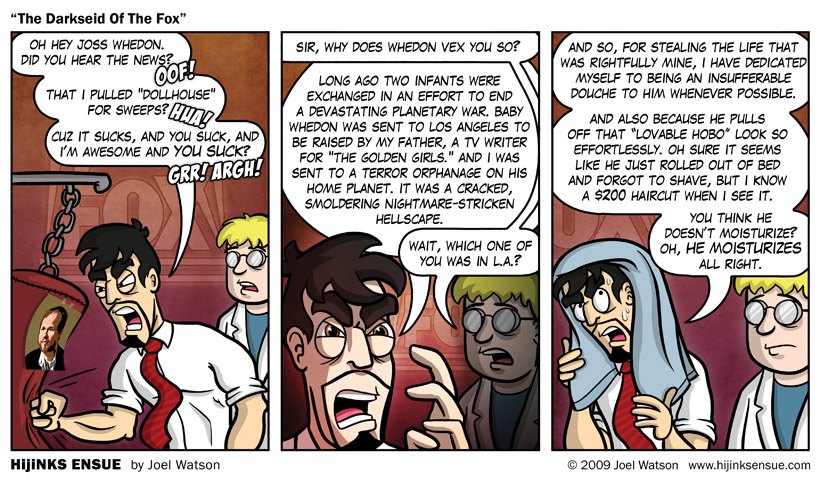 [HOLIDAY SHPPING DEADLINES!!! I’ll be announcing these soon, but if you want a book (especially an Artist Edition) you should probably ORDER IT like right now]

This origin story may sound familiar, and it may completely contradict the previous origin story for the Evil Fox Executive but hey, whatevs.

So Fox has decided to shelve Dollhouse for November sweeps, and air it 2 eps at a time when it returns in December. Sounds like they are blowing through their already canned episodes and fulfilling a contractual obligation with Mutant Enemy at the same time. A few days ago I would have said, “Meh, go for it. The show just isn’t resonating with its intended audience. The stories range from mildly intriguing to flat out boring (ie “Not Without My Baby” starring Echo Dushku).” Then (just like last season with 1.12″Omega”) they threw a curve ball and showed what was probably the 3rd best episode of the series so far, 2.4 “Belonging”.

I’ve been saying since the beginning that this show sould be Dollhouse: The Adventures of  Victor and Sierra. Last week’s ep was irrefutable proof to this point. Sierra’s origin story was fucking intense. Just brutal. There was character development, depth, drama and suspense coming out the yang. And she and Victor have such fantastic chemistry even in their blank doll states. I wonder how much of this improvement had to do with Jonathan “Space Beard” Frakes being in the director’s chair? Maybe this season can end with Echo being brutally murdered by Alpha then Victor and Sierra can take over for the fictional 3rd season that will only air in my fevered dreams.

YOU CAN WIN VIDEO GAMES FROM HIJINKS ENSUE BY DOING COOL STUFF!!!
There are 3 contests that you can enter to win a copy of Borderlands (PC) or Ghostbusters (360), but you have to ACT QUICKLY.

Thanks to everyone that came to see me in Austin, TX this past weekend. The Ka-Baam! shows were a fantastic experience and I hope to be involved next year as well. You can see the comic book covers I created for the improvisers to… improv off of HERE and HERE. The reader meetup after the Friday night show was a blast as well. It’s weird to think that I have internet-friends in pretty much every major city in America. The book signing at Rogue’s Gallery in Round Rock was fun too. Randy and the staff were extremely nice and we had a some very stimulating geek conversation. If you are in the Austin area, you should give them a look see.

I’ll be posting a ton of pics from the whole weekend on Flickr soon.