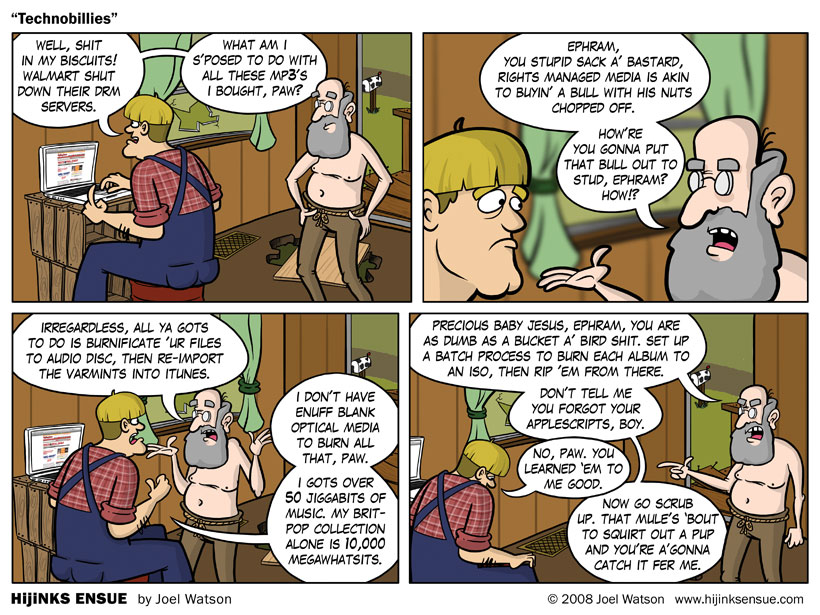 The fact that WalMart is shitting shutting down the DRM servers that allow customer who have purchased music from them to actually listen to said music is a mostly a non-issue for me. If you looked at all of your choices for online music purchasing and chose the place that gives you a case of Coors and a 30 lb bag of cat food with every oil change, then your probably deserve whatever you get.

I was forced for the first time to pay for DRM’d music when, in order to purchase presale tickets to a Ben Folds concert, I was required to buy his new album through the iTunes store. This was a problem for me on so many levels. Ben is my favorite performing artist of any medium. His music has had a greater impact on my life than I can explain in words and I want to thank and support him for that. That’s why I’ve gone to at least 10 Ben Folds shows in the last 8 years. I pay $40 a pop and he gets a healthy chunk of that. I buy $25 teeshirts and he gets nearly all of that. TicketBastard forced me to pay $13 for a group of crippled files, of which Ben probably gets $.05 per track (if that). His label, Sony, gets a fairly even split with Apple. So now I have to burn those broken files to a disk, re-rip them in iTunes and replace them in my library. It’s not hard. It’s just a hassle, and it certainly doesn’t support the artists, which is the only reason I would ever BUY music in the first place.

I enjoyed Ephram and Paw. I might bring them back in the future. Maybe they can tangle with Pete.

(Thanks to FB, Joe Conroy, for inadvertently giving me the punch line for this comic.)