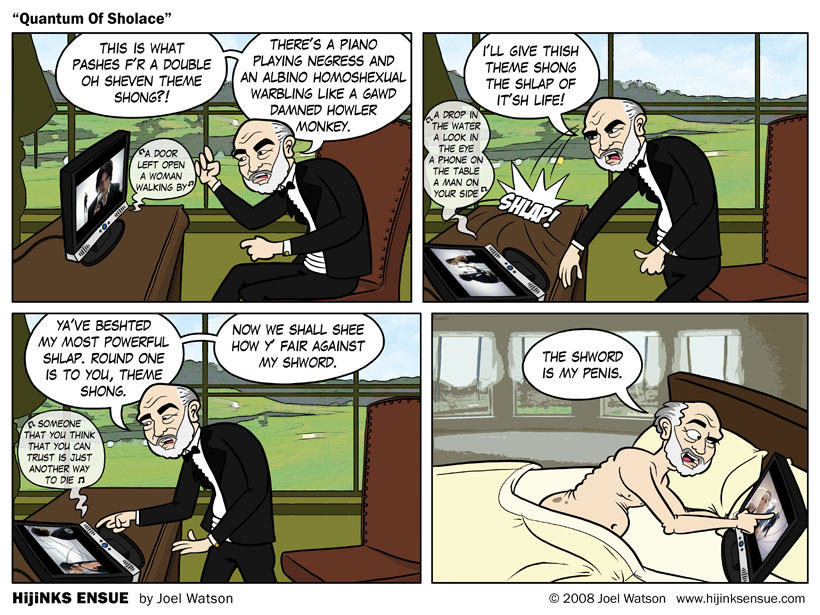 Of course I have no proof, but I assume when Sir Sean Connery the video for the new Quantum of Solace theme song, “Another Way to Die,” by Jack White and Alicia Keys he was upset to say the least. It doesn’t feature horns, sultry singing, guns pointed at the camera, blood running down the screen or girls in gogo boots. I’m sure he considered it a problem, and like any problem it can be solved one of two ways. By slapping the shit out of it or shagging it until it shuts up. He tried the former, to no avail, so he moved on to the latter. Seems to have worked like a charm.

Originally I was going to have him dig through a box of swords looking for just the right one to cleave the offending video in twain, but then I though, “NO! HE FUCKS THE TV! IT WAS SO OBVIOUS!”

I seriously have no idea what I was thinking. I do remember asking myself, “I wonder how many other cartoonists are drawing a post-techno-coitus Sean Connery right now.”

As for the song itself, I like it. It sounds like The White Stripes (imagine that) with better drumming and Alicia Keys on guest vocals. I always enjoy what Jack White tries to pass off as a guitar solo. It’s like he gets a fork tangled in his strings before he plugs in his amp, and the solo is the sound of his efforts to remove the extraneous cutlery.

A side note: in trying to write dialog in Sean Connery‘s accent I think I invented LOLCONNERY-Speak.