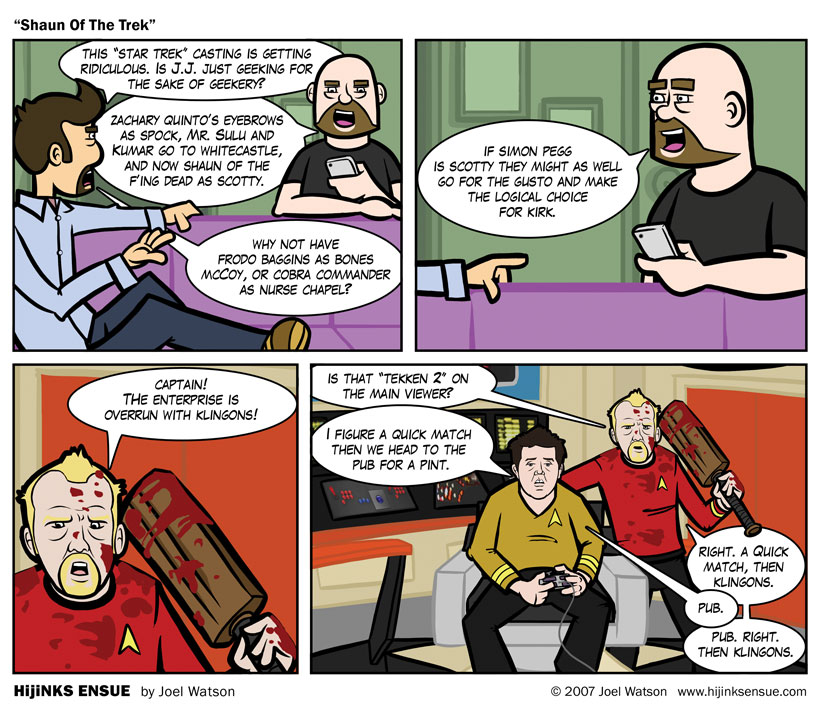 New Trek Reboot casting keeps flying out of the J.J. Abrams camp. Some dude is most likely going to be Kirk while the Incredible Hulk plays some random bad guy. And some chick is Uhura. And some Russian dude is all set to say “Nuclear Wessels.” Those less interesting bits aside, the rest of the crew seems to be fleshing out into some sort of geek/stoner/loser dream team.

I see J.J. (we’re on a first two initial basis. He calls me J.F.) rifling through a pile of DVD’s, comic books, and video games just yelling out names and roles at random while his assistant frantically calls their agents.

“Here’s Futurama Season 2! Let’s get Planet Express Ship to be the Enterprise. See if Sigourney Weaver is available to do the voice. Oooh, call Shigeru Miyamoto and see if Super Nintendo can play Ambassador Sarek! He would be perfect. And I want the Macho Man Randy Savage in a triple tag team with Julius Ceaser and the Planet Mercury to be the red shirts. They all die on the first beam down. Are you getting all of this? This is gold! I lactate geeky hollywood gold. Shelley, are you writing this?”

Thanks to everyone that voted for todays comic topic. I’m sure I will do more of that in the near future. Pegg-Trek won out over Thundercats/Gears of War with 52% of the vote as of this writing.

In the coming week, look for new Apple Insider Comics from your truly, as well and new and exciting developments right here on H.E.