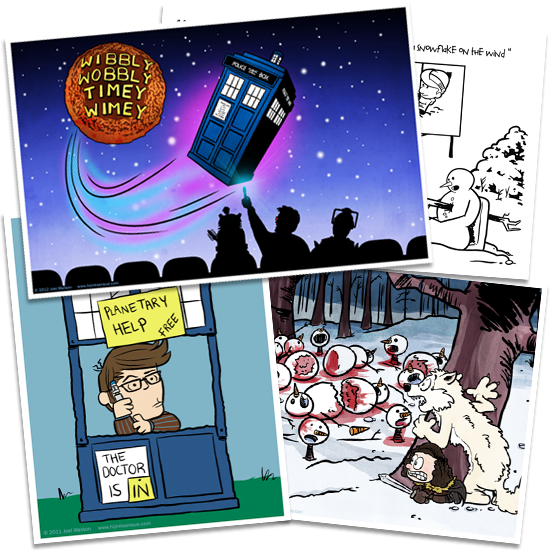 You can even get a big ass print of the Doctor Who/ MST3K comic.

I know I’m a late adopter, but I just got my first Blu-Ray player in December. Having amassed and subsequently ripped/server stored/eBay’d a rather sizable DVD collection, I thought I was done purchasing movies via physical media. I bought the player mostly for Netflix, but seeing as it was there and that it had all those P’s (1,080 of them to be precise) I figured I might as well start re-acquiring A) My most favorite/ infinitely rewatchable movies (your Lebowskis, Ghostbusters, Princess Brides, Backs To Futures and such) and B) My most favorite gorgeous/visually stunning films (your Avatars, Fireflied Serenities, various Pixar’d Cartoonicals, Lords Of Some Rings,  and what not). On a lark I threw up about 25 movies on my Amazon wishlist and shit-in-my-biscuits if’n they weren’t nearly all purchased by your magnificent Fancy Bastards within a couple of weeks. Merry happy to me! It was the highest def’d Xmas I’d ever had! Many of them were sent anonymously or only with first names, so if I didn’t thank you directly please know that I am extremely grateful.

A couple of very nice FB’s got me the Lord Of The Rings (Extended) Blu-Ray set for the very Blackest of all Fridays (before we even had the Blu-Ray player), and my wife and I just sat down to watch Fellowship this weekend. I know I am a heretic, but I HAD to zoom that shit in. I can’t stand seeing the black bars taking up 1/3 of my TV. I’m just the type that would much rather see a full 16:9 picture than know exactly what the rest of that one Orc’s shoulder looks like before he movies fully into frame. I realized this type of zoom-happy behavior is a dealbreaker for many of your videophiles, but having crossed the threshold of fatherhood and 30-year-old-hood I find myself giving less and less of a shit about “BUT THAT’S NOT THE RIGHT WAY TO NERRRRRRD!!!” and more about comfort, ease of use and simplicity. Zooming in my Blu-Rays to fill the screen is basically the entertainment equivalent of staying in sweatpants all day. Sure, it doesn’t look as nice, but who’s really gonna know besides me?

COMMENTERS: Is there a particular “accepted nerdy way” of doing things that you just refuse to bend on? Do you rip all your audio in lossless codecs? Do you get twitchy when you see that someone’s surround sound speakers are improperly placed [raises hand]? Have you ever managed to unburden yourself from any of these behaviors to positive results? 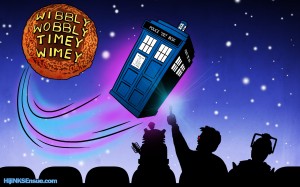 All HijiNKS Ensue wallpapers are now available on a “Pay what you like” donation basis. Please consider donating to support HijiNKS Ensue.

TO CURRENT VAULT SUBSCRIBERS: I am currently reworking the Vault and the incentives for donations. I have some really fun stuff to announce, hopefully later this month.

Posted in Uncategorized and tagged blu-ray, hd, lord of the rings, movies, tech.