Randy and I shared a table at Austin Comic-Con. There were tons of HE and S*P readers there and we both had a great time. We even did a meat-fueled reader meetup at Ironworks BBQ, which was also… OH GOD DAMNIT! MEATUP! WHY DID I JUST NOW THINK OF THIS?!?!? THAT WOULD HAVE BEEN PERFECT! Oh well. 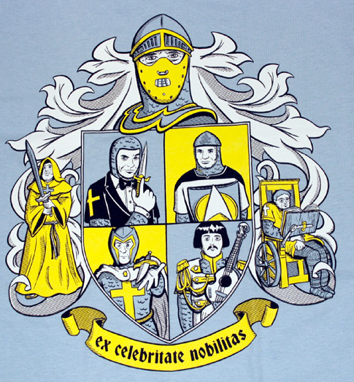 Anyway, there was a strange phenomenon at the show whereby children kept taking Randy up on the offer proposed by his “FREE SKETCHES” sign. The interesting thing about this is that Randy produces content that isn’t safe for most adults, let alone ANY children. I mean, maybe those kids with the machine guns I see on the news could take it, but soft, weak American children? No way. He must have drawn a dozen Marios, Luigis, kittens and other non-offensive characters. Perhaps the kiddos were encouraged by his “8-Bit Dante’s Inferno” poster, or the fact that he had just shaved off his hobo-beard the day before and appeared slightly less like someone who’s “free sketches” came with an invitation to the candy van.

Those of you Austin-dwelling comics fans who didn’t make it to the show will have another chance to stare and me, Randy and many of your other favorite webcartoonists sometime around December 11th at the Dragon’s Lair Webcomics Rampage at Dragon’s Lair Comics in Austin. Check back soon for specifics.

Are you listening to the HE Podcast? YOU SHOULD BE!