Dragon’s Lair Austin is hosting HijiNKS ENSUE, Something*Positive and Cyanide & Happiness at their booth this weekend as a special preview of December’s Webcomic Rampage event. 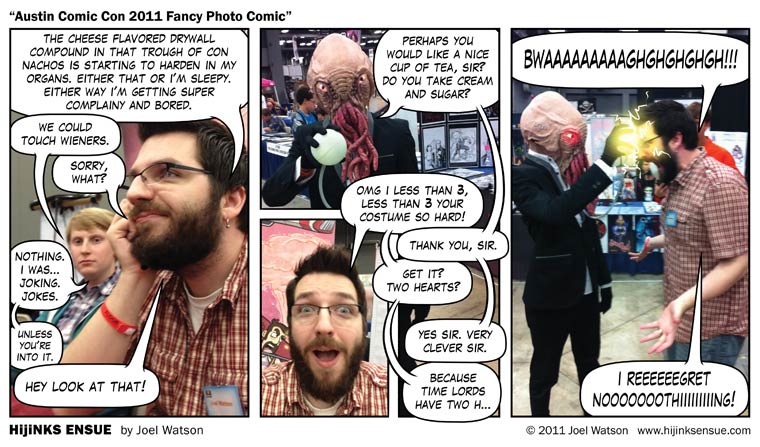 [Since I was unable to make comics during Austin Comic Con, I am backdating a few LoFi’s and a photo comic in the archive as not to interfere with the coming week’s comics. Please to enjoy.]

This  fancy photo comic features my favorite Doctor Who cosplay of all time, if not my favorite cosplay period. I don’t know if the Ood mask was purchased or made, but the eyes glowed and it was entirely rad. Big thanks to James for being my booth babe all weekend. We never did touch wieners, but there is always next year.

COMMENTERS: Come up with the mouseover text for this photo comic. I will pick my favorite one and add it to the archive permanently. [UPDATE: Ok, I actually just picked my own. Sorry.] 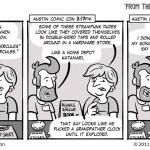 [Since I was unable to make comics during Austin Comic Con, I am backdating a few lofi’s in the archive as not to interfere with the coming week’s comics. Please to enjoy.]

Most of the things HE Fancy Booth Babe James says in this comic are actual quotes. Somewhere along the way, he accidentally got pretty funny. I texted the thing about Kevin Sorbo to Wil, to which he replied “Lollerskates.” That’s about as high a seal of approval as a joke can ask for. I think James peed a little (a lot).

I do believe the next update will be a rather short Austin Comic Con fancy photo comic featuring my favorite cosplayer of the weekend. Feel free to guess the costume in the comments. Hints: I have never seen this costume done before (in 30 or so cons), it was executed perfectly and part of it glowed.

COMMENTERS: If you are a frequent con-goer, what costumes, activities, merchants, exhibitors, nachos, etc are you sick of seeing at every single show? What would you like to see more of? Personally, I am done with ill-fitting Starfleet uniforms, “free hugs” signs and artists that sit at their tables drawing, never looking up or making eye contact with anyone. I would like to see more well tailored Starfleet uniforms, alternative materials costumes (duck tape Bat Girl, paint swatch medieval knight, etc) and a Predator whose mandibles are mechanically articulated. 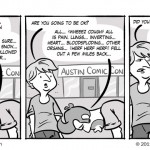 [Since I was unable to make comics during Austin Comic Con, I am backdating a few lofi’s in the archive as not to interfere with the coming week’s comics. Please to enjoy.]

The spritely youth, full of vim, vigor and wide-eyed optimism is former HijiNKS ENSUE summer intern and current Austin Comic Con booth babe James. The above exchange happened nearly word for word as we arrived at the Austin Convention Center for setup and day one of the con. It is safe to say that I don’t get much exercise. Thus, when presented with the occasional physical exertion (which apparently includes walking a few blocks from the parking lot while pulling a hand cart), my body responds with cardiac arrest, renal failure, sudden onset juvenile diabetes and spontaneous human oldness disorder. These maladies were exacerbated by the fact that my back pain is at a sort of all-time high right now, which has also prompted me to use a cane while walking to and through the convention. I am merely 60 Vicodin and a few misdiagnosed cases of Lupus away from House territory.

It’s very strange realizing that your body is slowly but steadily betraying you. I don’t plan to use the cane permanently, or even that often, but it seems to help relieve some of the strain typically caused during a convention (typically brought on by bad chairs, lots of sitting, lots of lifting, lots of carrying, etc). I am extremely aware of the fact that I am using it. I am not able to just take a leisurely stroll without being constantly aware of trying to line up my new “magic leg” with the other two shitty ones. It’s like dancing with a one-legged robot.

COMMENTERS: Assuming you are not 14 or a mandroid, when did you first realize you were aging/getting older? Basically, tell us what you used to be able to do that you can’t do any more, preferably with some embarrassing story of personal injury or dismemberment. 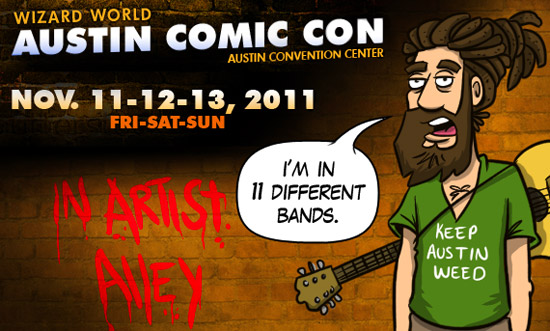 Austin-style Fancy Bastards, I am going to be at Austin Comic Con this weekend (Nov 11-13)! I will have books 1 and 2, “The Doctor Is In” shirts, “Winter Is Coming” shirts and just a few sizes of “Edward“ and “Ewok Stare.“ I will also have prints, stickers and sketch cards upon which I will draw nearly anything for a monetary tip of some kind.

I will be accompanied by my old HE summer intern (HEntern), James. He will be taking your cash, fetching your shirt sizes, running your credit cards, acting as my personal foot stool and side table, and doing a little jig at random intervals for my amusement. If you must pelt someone with things, that it was he is there for.

Also appearing at the con will be Dennis of LAWLS, who recently nearly died updating and fixing the CSS on my website, and the illustrious be-DeLoreaned Ernie Cline, author of Ready Player One. Now it isn’t just going to be the three of us. There are about 100 comics and genre TV/ movie guests as well. Damn near half the cast of Buffy is going to be there, so will certainly be able to get your Scooby-squee on. It’s a fun show with plenty to see, but it’s not overwhelming. Come. You will have geeky fun.