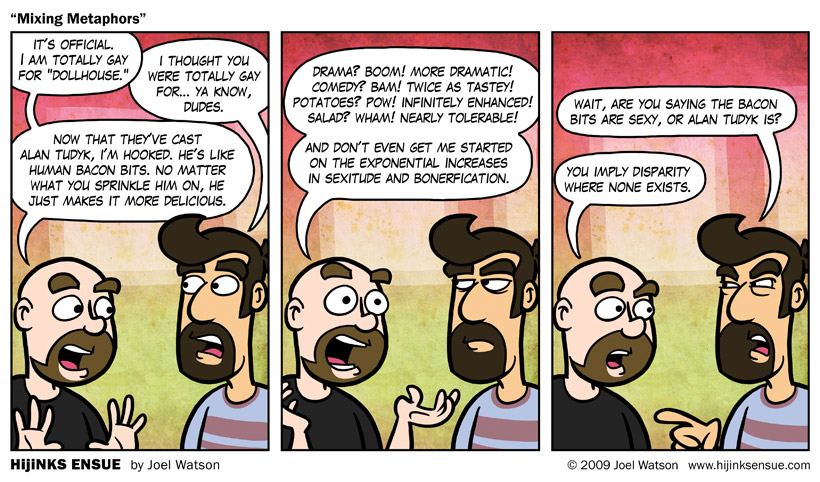 [having dinner with the family then posting more… but the thing you need to understand is that Alan Tudyk KICKED AMAZING SHINY AMOUNTS OF ASS in his guest roll on “Dollhouse,” thus ensuring my undying love for the series and it’s emanent demise.]

And just like bacon bits, Alan Tudyk somehow enhances the performances (flavors) of all those around him while simultaneously stealing the show. I don’t want to spoil the most recent episode of “Dollhouse” for those that haven’t seen it yet, but I will say that Joss couldn’t have picked a better actor (than Alan) for the part.

Not only is Tudyk an amazing TV actor, but he is also a fantastic song and dance man. When I saw “Spamalot” on Broadway, I was a little pissed that Hank Azaria was absent from the cast. That is until I learned that his replacement was my favorite Hawaiian shirt wearing space pilot. WashAlan took over the roll of Lancelot (who liked to dance a lot) and (all together now) HE STOLE THE EFFING SHOW.

We met him briefly after the show and I managed to utter something like, “…uhhhh….we….brown coat…. love….[throw up].” Upon hearing the “B” word his face changed from the “Im smiling because people are taking lots of pictures of my head” smile to a more somber and heartfelt visage that said, “you and I have both experienced love and loss. We are kindred souls, forever bound in a brotherhood of space piracy and plastic dinosaurs. Would you like to come to my house and play Apples To Apples?”  He said all of that with a look, but his mouth said something like “oh, hey man. thanks.” Also he went to high school like 15 miles from here, so that practically makes us BFF’s.

Tudyk’s appearance on “Dollhouse” was important for two reasons. A) He just kicked so much ass, and B) It signified the show finally getting to the meat of it’s primary story arch. The same meat that was missing entirely from the first 5 episodes. NOW this is a show that I really want to see play out… also, it’s totally cancelled. [even though Dushku says it’s not cancelled “yet”]