Wil and I made you a Sparks McGee T-Shirt! 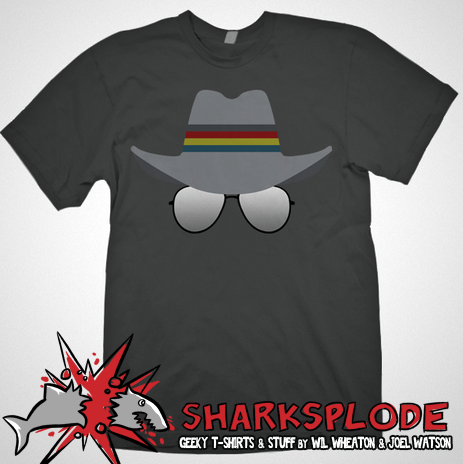 Confused? Of course you are! Read up on Sparks McGee and his awesome adventures.

Guys, please go see Pacific Rim. Let’s cancel this film’s financial apocalypse before it happens. Let’s be the giant robot heroes that stand up for the a movie that is basically a love letter to monters movies, robot movies, sci-fi, and nearly everything I hold dear all at the same time. Seriously, if my kid was in this movie I would probably cry just thinking about it.

Remember a few years ago when all the economists said the economy was going to go in the shitter, so people got terrified and stopped buying stuff and the economy went in the shitter? The jackbags calling an early death for Pacific Rim are participating in the same self fulling negativity. The more people that read “this movie is probably going to loose a hundred million dollars,” the more people are going to say “Meh, that won’t be good enough for the theater. I’ll see it on the bluetubes.” Stand up for scifi and robots and monsters and Idris Elba! GO SEE PACIFIC RIM THIS WEEKNED!

[Sweet miserable crapbastards, please don’t let this be another Prometheus…]

COMMENTERS: Have you ever assumed something (a movie, a tv show, a book, a game, a whatever) was no good because you read a bunch of negative press about it (not bad reviews, just general negativity), only to find out later that it was great? On the other hand, what thing that was SUPER HYPED WITH OVERWHELMING POSITIVITY were you the most disappointed in?

What? I liked it!

I think part of why I liked it was expecting it to be a 3-4 out of 10 at best, so I was pleasantly surprised it was about a 7 for me. Also, having few to no expectations due to never having seen/heard any old lone ranger episodes.

I would go see Pacific Rim, except I already saw it. But when I saw it, it was called “Neon Genesis Evangelion”….
Block IPDelete
Reply

Meanwhile, in Ancient Greece, someone complains that they like Hercules better when he was called Gilgamesh.
Block IPDelete
Reply

I say the “Please don’t suck” mantra for Pacific Rim 5 times a day at the designated points related to the sun’s position in the sky.
Block IPDelete
Reply

You’re our only hope.
EditDelete
Reply

Whether or not it sucks, I’m giving them my money just to support the concept. We NEED more film like this. Where’s my live-action Voltron?

I’m just glad they stopped making films based on board games. Rock ’em Sock ’em Robots: The Movie was horrid, Battleship was worse, and Hungry Hungry Hippos the TV program is bluh. Give us more kaiju!

You may refer to it as Here Comes Honey Boo-Boo.
Block IPDelete
Reply

Super hyped with overwhelming positivity, but ended up sucking? Easy.

Remember how excited we all were when the trailers came out for that? It was going to be so great! *sobs*

Had the world ended after the trailers for episode 1 but before the movie came out, we’d all be happier.
EditDelete
Reply

All of the Matrix movies.

I read/heard bad things about the first one, which turned out to be awesome.
Everyone super-hyped *all others* which sucked so much I refuse to admit they exist.
The “story” didn’t need them.

wait, you heard the first sucked but the others were awesome?

Your friends are from a mirror universe. Draw goatees on their faces then kill them to preserve the sanctity of our existence.

Godzilla. The one in the late 90’s with the guy from that movie where he does that thing.
Block IPDelete
Reply

Oh man. That was a MEDIA FUCKTON BLITZ, wasn’t it? I probably still have one of those Taco Bell cups somewhere.
EditDelete
Reply

Oh god…. I have the movie on VHS somewhere. I was young and naive and knew nothing of the true greatness of the King of Monsters so I thought it was a good film…

That’s all been rectified now that I know better

Got to see a free advance screening of Pacific Rim yesterday.

GO SEE THIS MOVIE. I never watch movies twice but I’m going this weekend because it’s good enough that I should have paid for it…. so I will.

It is SO much fun you guys. It’s the perfect example of the difference between a big dumb fun movie that doesn’t ask you to think and a big asshole movie that assumes you are too stupid to think.

So… it was good?
Block IPDelete
Reply

Go see it and find out for yourself!
Block IPDelete
Reply

I may go see Pacific Rim just to hear Ellen McLain as the voice of the computer AI–hearing GlaDOS on the big screen would make me incredibly happy. I might need to drink beforehand, though.
Block IPDelete
Reply

Prometheus. I caught it on cable recently and really enjoyed it. Yeah, there are some plot problems with it, but not enough to warrant the hate it got.

As for a super-hyped shitty movie… I don’t know. Maybe Sucker Punch? Was that movie super-hyped? I know I absolutely hated it.

It wasn’t so much super hyped as it was SUPER directed at nerds, so I think we felt it more than most. And yes it was terrible.
Delete
Reply

I think that movie was more of a demographic fail than an honestly bad movie. As an appreciator of both nerditry and “film art”-type-movies, I would put it 100% in the latter category. My girlfriend (who mostly loves foreign and independent films) absolutely adores it.
Block IPDelete
Reply

I have never assumed a movie would be bad and got a surprise of goodness, but I have had a hyped up movie disappoint me… Avatar was NOT as good as everyone said it was. I am not saying it was horrible, I just felt it was merely an ok film that was hyped to be the be all and end all of the film world. A CG’d live action FernGully is all I got out of that.
Block IPDelete
Reply

I’m bad at not liking things. I’ve only ever disliked one movie that I’ve seen, and that was because I was a kid, wanted to see a war movie, and went to see Jarhead.

I always like movies when I go to see them. Sucker Punch, John Carter, the Matrix Sequels… the Star Wars Prequels… etc.

God, so many bad, over-hyped movies:

Avatar (Dances with Toruks or Ferngully in Space)

Aliens (Alien was a brilliant horror movie. Aliens was a 2hr 17 minute long demo for a single-shooter video game)

Dances With Wolves (if I were Lakota Sioux, I would hunt down and kill Kevin Costner with my bear hands)

You’re so racist: Native Americans don’t actually have bear hands. They do have eagle wings, however.
Block IPDelete
Reply

Yeah, I thought Avatar was overrated, too.

I don’t usually let bad reviews put me off of seeing a movie I otherwise would want to see. I often find that I disagree with critics and the opinions of the majority.

This +1000. I loved this movie, and I actually have read the book (and most of the sequels). Love it.
Block IPDelete
Reply

Pleasantly surprised by: Harry Potter. I was expecting a bunch of kids’ movies. What I got was a bunch of teenager movies, so I’ll call that a win.
Block IPDelete
Reply

When Legally Blonde first came out, I thought “Oh, great, a movie about a rich ditzy blonde – PASS!”

And then much later I saw the film described in ways that made me think “wait – WHAT?” and I rented it… and discovered how dreadfully wrong I’d been. I don’t know if the advertising was misleading or if it was my own internal biases or a little of both, but it’s now one of my favorite films. (The sequel… not so much; the main reason to see that is for Bob Newhart.)

I thought it’d be such a chick flick that I refused to acknowledge it when it came to the cinema. Then when a friend got me the DVD as a *Joke* present I decided to watch it one afternoon when I was bored. I couldn’t believe how funny it was and Reese Witherspoon did such a good job with the part.
Block IPDelete
Reply

The Dark Knight Rises. UGH. Such a great predecessor, and Nolan gives us that trainwreck?
Block IPDelete
Reply