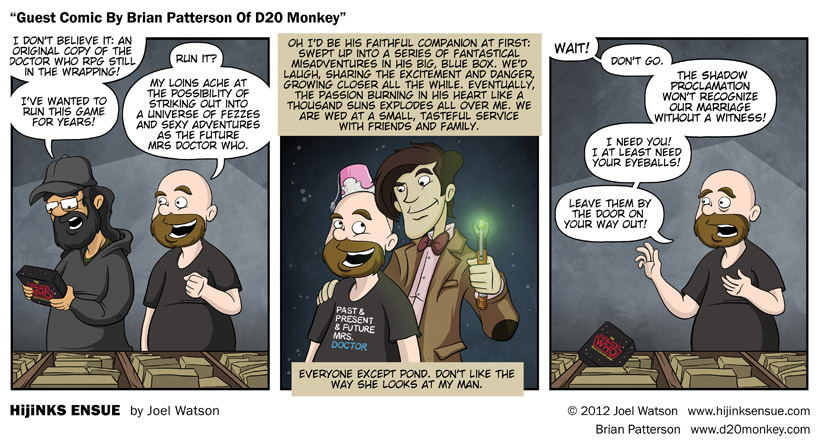 Wil Wheaton and I got excited and made this “Fighting Time Lords” shirt!

Since I am packing and print-making and prepping for C2E2, Brian Patterson was kind enough to provide you with an illustrated funny-time concerning role playing, Time Lords and a completely different kind of role playing. Brian makes a comic called D20 Monkey, which should quite adequately fill the dungeon and or dragon shaped hole in your geek soul that HE just doesn’t do anything for. Brian did THIS other HE guest comic last June, this one from March and THIS guest comic for my friend Alina just a few weeks ago. He has a shirt HERE that I think is amazingly well designed and funny, even though I would be a total poser if I were to wear it.

COMMENTERS: Have you ever had a game or movie or whatever that you were just DYING to share with your friends? Something from childhood that you might have perhaps been remembering through a filter of stupid child memories? Did it live up to the hype or were you disappointed and embarrassed. This has happened to be a few times with movies. The first was the partial-Python Beatles spoof The Rutles*, and the other was the 90’s gangta rap Spinal Tap homage Fear Of A Black Hat. Both were quite unique and hysterical when I first saw them (around age 15), but context is everything. In the intervening decade the mockumentary format was run pretty square into the ground, and I (as well as those I was so excited to share these films with) had become desensitized and jaded to the genre.

*Upon further reflection I might be confusing my second later in life viewing of The Rutles with a different post-Python project called Ripping Yarns. The Rutles might still be hilarious.

C2E2 in Chicago is this weekend! I’ll be with Blind Ferret at Booth 432. More details HERE.
If you are coming to C2E2, you really don’t want to miss our panel: