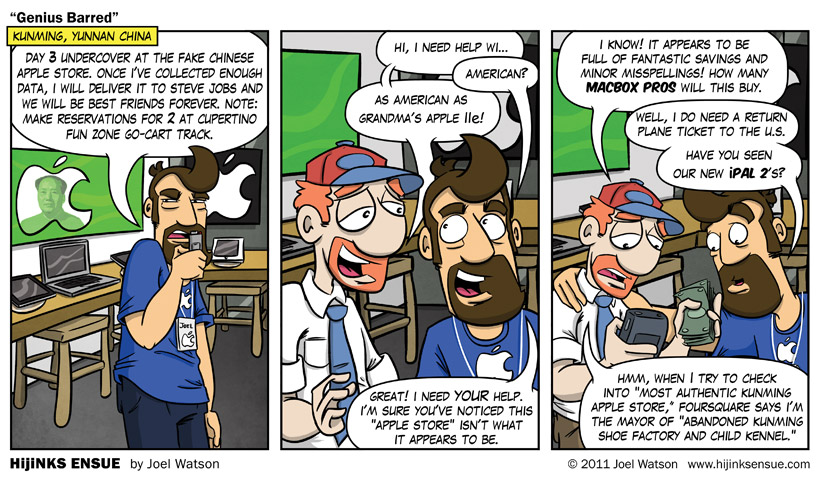 Today’s comic is a super special crossover event with one of my favorite webcomics, Not Invented Here. See how the action plays out (or refuses to) in THIS bonus Friday NiH comic. Not Invented Here is the brainsplosion of my friends Bill Barnes and Paul Southworth. You may know Bill from his other comic Unshelved (because libraries are funny?) and his incredibly hurtful foreword to my first book. Paul (who normally draws NiH, but if off this week) is the creator of Ugly Hill (one of the first comics I ever did a guest strip for) and Isaac Splode.

Not Invented Here started out as a comic by an ex-programmer for current programmers, but has since evolved beyond its premise (as good comedies often do) into a character driven gag/story about two friends (one of whom is Owen, shown in my comic above) working in an intensely corporate environment. Bill writes the strip based on 30… 50… at least 75 years of experience in the software development world. If you have ever coded, worked with a coder, had a manager that imposes impossible deadlines/milestones, or spent any time at all sitting at a desk for 10+ hours a day firing mental hate-rays at the clock then you really need to check out this strip. If you want to see how the comic normally appears courtesy of Paul’s expert and enviable art style, check out THIS ONE or THIS ONE. Otherwise you should start reading from the beginning and/or pick up their first book, Runtime Error.

Bill, I believe this completes my contractual obligation. Now please tell me where my family is.

COMMENTERS: What other products are for sale at the “Apple Store”? What other details, defining characteristics or employee behaviors might be a tip off that something is amiss?