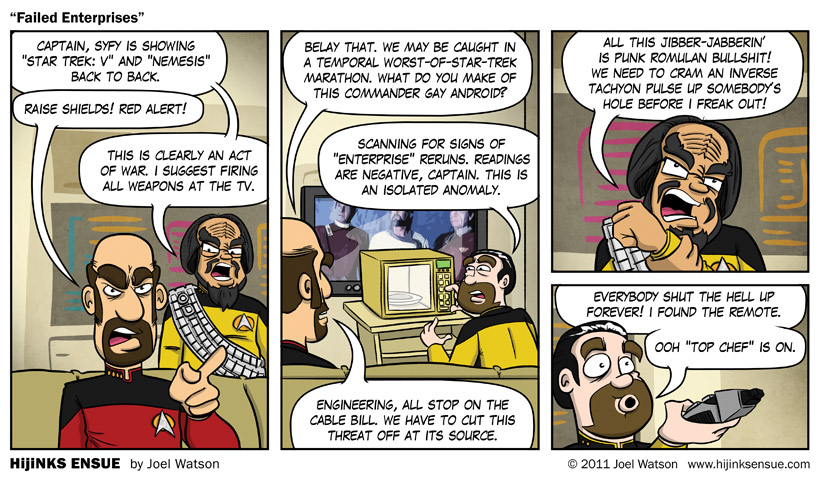 HEY LOOK AT THIS: This is your LAST WEEK to order an Ultimate Fancy Edition of Book 2 AND get your name in the book. Files go to the printer on January 15th. After that you will still be able to order a UFE but you will NOT be listed in the book on the Fancy Bastard Wall Of Fancy Fame.
ORDER THAT FREAKIN’ BOOK, YO!

SyFy has been airing Star Trek V: The Final Frontier and Star Trek: Nemesis back to back for several days now. That’s so ballsy, it’s almost like they want you to believe THEY think it’s a good idea. Bold. Very bold, Syfy. We get it. You have weapons and you’re willing to use them. This is the Cable TV equivalent of North Korea shooting a missile into the ocean. There isn’t a specific target, but they want to make sure we know they are armed and they are not to be fucked with.

Sometimes I wonder how self aware SyFy actually is. They produce fantastic shows like Eureka and Stargate SG:U (until they cancel them), but they also greenlight 40 or 50 poorly rendered CG monster-of-the-week movies like Crocodozer Vs. Dinocopter every day. Do they realize how most Trekkies feel about those two Star Trek movies in particular? Is that why they decided to combine them into a 4 hours rock block of pain and suffering? Or does whichever program directer made that call have absolutely no idea how amusing and unfortunate his choice was?

Nemesis and The Final Frontier suffer from a lot of same flaws. Namely, each had a director that cared nothing about the previous legacy of Star Trek. Nemesis was directed by Stuart Baird, who admittedly knew nothing of the franchise and cut over a third of the film which featured key character developments in favor of more pointless action scenes, and The Final Frontier had William Shatner. I don’t think Shatner purposefully wanted to sabotage Star Trek as a franchise, but he’s an awful director and I don’t think he could see past his own ego to realize he was taking on a task for which he was not qualified. Though he was only part of the reason Star Trek V was unwatchable. The script was ridiculous, the FX were garage-quality and plotwise, some stuff happens that doesn’t matter to people you don’t care about, and then it’s over. It was a deeply flawed film.

Commenters: What other movie combinations might SyFy air back to back for maximum sadness payload? Feel free to give your opinions about what exactly went wrong with Trek’s 5 and 10 and how they might have been fixed (honestly, there’s no saving Final Frontier. You can’t polish a space turd).