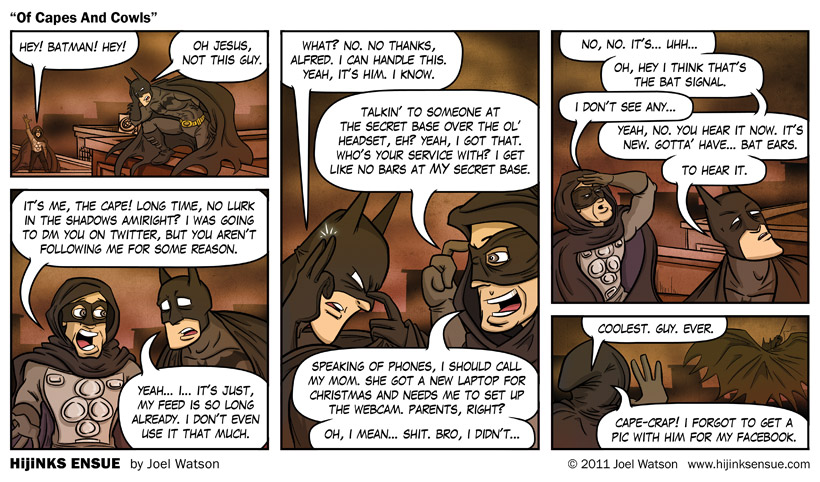 READ READ READ READ:
This is your LAST WEEK to order an Ultimate Fancy Edition of Book 2 AND get your name in the book. Files go to the printer on January 15th. After that you will still be able to order a UFE but you will NOT necessarily be listed in the book on the Fancy Bastard Wall Of Fancy Fame.
ORDER THAT MOTHER FANCY BOOK, YO!

“You should come check out my new ride. I call it ‘The Scrambler.’ Oh, and you’re going to love these. Bam! Cape-arangs! Pretty sweet, right Bats?”

The Cape Spoilers ahead: I watched the first two episodes of The Cape because I feel it’s my job to jump on these sorts of tv-grenades and absorb the initial impact in hopes that more of my fellow geek-kind can be spared the poorly written, campy shrapnel. (Shrampy campnel?)

In short, The Cape gets everything wrong. It walks too thin a line between “campy superhero shenanigans” and “brooding Dark Kightesque seriousness.” The story, the costumes, the characters and the writing are so silly that any attempts the show makes at drama or real emotion are completely lost. I know many of you enjoy a healthy dose of camp in your super hero shows and The Cape delivers it in spades. It receives a 4.5 on The Greater Xena Scale of Sunday Afternoon TV Silliness. But I have a feeling even you campers out there would take issue with the completely Batmanshit nuts plot of this show.

Here’s the basic rundown (and a summary of how the whole thing is a complete rip off of Batman Begins): Palm City used to be a nice place, but now it’s full of crime and corruption (just like Gotham). All the cops are dirty except for one, our hero Vince (ie Jim Gordon from BB). There’s a villain called Chess, who has chess pieces for eyes and something something he really likes chess. He’s also the CEO of the corporation that’s taking over the city’s police force. Vince (the lone good cop), takes a job for Chess’s corporation as a private security officer and gets set up by his best friend and Chess to take the fall for Chess’s crimes. He is outed as the villain, and appears to die in an explosion leaving his wife and child behind, but escapes and is rescued by a band of circus freaks lead by Keith David. Turns out they are actually bank robbers and Vince has a magic keycard that opens any bank vault in the city. They rob a bank and everyone, including Vince, is happy about that for some reason.

Now that they are all friends, Vince decides he needs justice (like Batman), vengence (like Batman) and he needs to be a symbol for good instead of just a man (like Batman, almost verbatim from BB) and Keith David and his merry band of midgets and weirdos are just the bunch to teach him the arts of fighting, acrobatics, illusion, sleight of hand, misdirection, and mind trickery (The League of Shadows and Ras Al’Ghul from BB) to make his transformation to super hero complete. There’s a training montage where he learns to fight with a magic cape that is light but can become rigid (like in BB), how to use smoke bombs to disappear (just like BB), how to hypnotize people and how to wrestle a midget (just like in… wait…). This is all good and well until you realize that it all basically happened over the course of an afternoon or two. He MASTERS hypnotism to the point that he hypnotizes the hypnotist in a few hours. He can use his cape to snatch knives out of hands after maybe 45 minutes of practice. Whatever.

So with his new costume and arsenal of quickly gained super-abilities he heads out to find this shipment of super explosive that’s being brought into town by Chess. When he gets to the train yard there are shipping crates full of stuffed animals that contain the illicit cargo (just like in BB) and he begins to snatch the baddies one by one into the shadows, totally unseen (EXACTLY LIKE IN BB. IT WAS SERIOUSLY A COMPLETE REMAKE OF THE SHOT FROM BB.) While trying to take down Chess he runs into Orwell (played by Summer Glau) who is a blogger trying to expose the corruption of Chess’s false corporate identity. The first scene between The Cape and Orwell goes something like this. “So you’re a super hero now? That’s cool. Now we’re partners.” Niether party asks any questions of the other. They almost just exchange glances then form a crime-fighting duo. You would think there’d at least be a standard contract to fill out or a 1099 or something.

The Firefly code forces me to evaluate Glau with more leniency than I would others, but the best I can say is that she does all right with what she is given. And what she is given is pretty shitty. The plot is riddled with holes, the dialog is just plain dumb and the characters have little to no motivation to being doing the completely outrageous things they are doing.

The Dark Night get the “homage” treatment too. By the end of the second episode Vince’s fake-widow basically becomes the Rachel Daws character from BB and TDK. Also his “taking the fall for someone else’s crimes” echoes Harvey Dent in a not-too-coincidental way AND they introduce a second Jim Gordon/Rachel analog in the guise of “the lone city councilman who will vote against Chess taking over the prisons despite death threats and murder attempts.” There are literally dozens of other close comparisons between The Cape and Christopher Nolan’s Batman movies but to list any more of them here would be to post the entire script for the pilot.

Verdict: I didn’t hate The Cape, but I won’t be watching it regularly and I can’t give it a recommendation. It is stuck between 90’s era TV camp like M.A.N.T.I.S, VIPER and MUTANT-X and legitimate super hero franchises like Batman Begins/The Dark Knight.

COMMENTERS: Did you watch The Cape? What did you think? Did I miss anything worth mentioning?