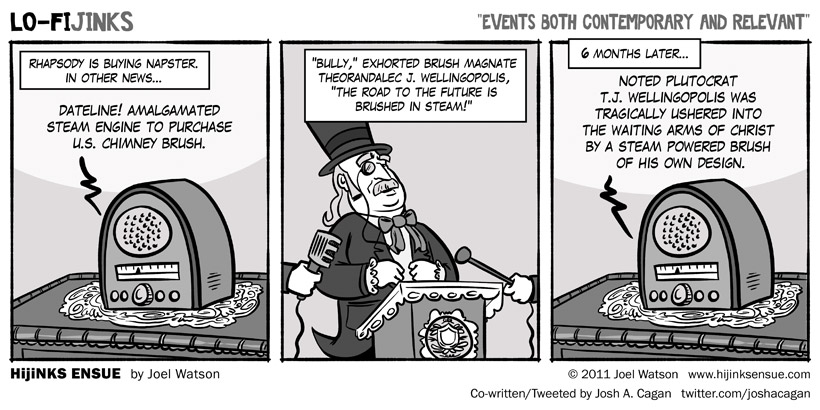 In other, more shocking news, there is still a thing called Napster. This comic was unwittingly co-written/co-tweeted by Josh A. Cagan, a writer who hails from Satan’s very bosom, L.A. We were introduced by Wil Wheaton at w00tstock SDCC this year and our twitter accounts have been inextricably linked ever since. I give you a strong “FOLLOW” recommendation on the grounds that he is consistently hilarious.

COMMENTERS: Please construct your own headline + tagline combo of equal contemporary relevance to “Rhapsody buys Napter. Entire Internet abuzz with indifference, yawns.” I wonder what Pets.com is up to these days. Also, feel free to share stories of using now obsolete services (online or otherwise).

GUEST WEEK AND NYCC!!!
GUYS! I am going to be at New York Comic-Con with Blind Ferret next weekend  (10-14 to 10-16). I will have books 1 and 2, T-Shirts (including the new “Winter Is Coming” shirt and maybe a debut of another new shirt), stickers, sketches and prints. I am going to be staying in Brooklyn so I hope to hit up the Doctor Who themed bar, The Way Station. Maybe we can do a bit of an informal Fancy Bastard Meetup there.