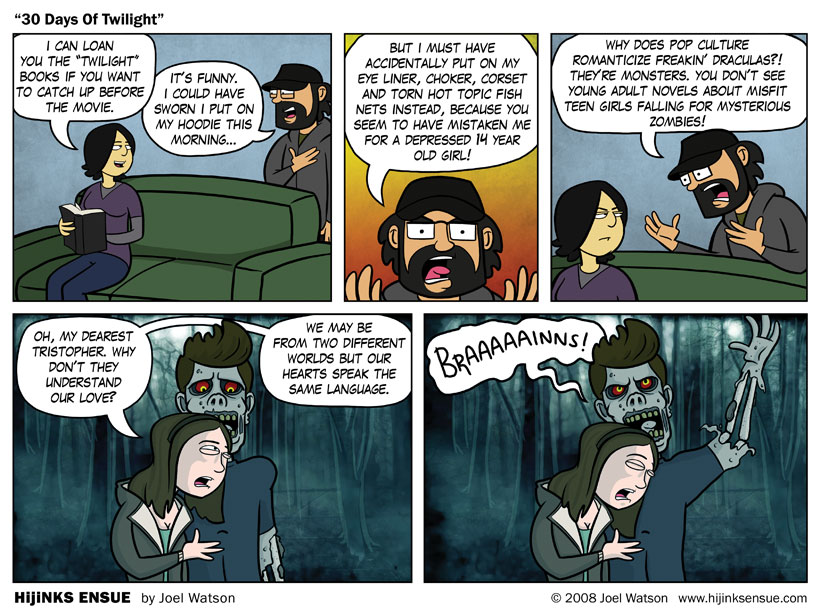 A zombie’s motivation is always so clear and direct. That’s why they make great characters in young adult fantasy fiction.

I don’t know much about Twilight (the books or the movie) so I won’t make any sweeping judgments other than to say it seems like something I wouldn’t be all that interested in. I like my vampires combustible and be-fanged and from what I’ve read, Twilight’s are neither.

I’m always facinated by what captures the imaginations of the nation’s youth. These mega-trends (Pokemon, Dragon Ball Z, Harry Potter, Twilight, etc) tend to spawn countless imitators that try to capitalize off their success. Though the Twilight series will never reach Harry Potter numbers, the franchise is doing quite well with far less in the way of originality and writing talent (again, this is just what I’ve read) than it’s wizzardly contemporary. The movie isn’t even out and the soundtrack has already topped the charts. I guess you could argue that twilight is banking on the Potter-starved masses to gravitate towards anything with young characters and fantasy elements. I wonder if Harry Potter opened their eyes to the great works of fantasy that were already available (Tolkien) or just opened the gates for dumbed down teen-pire love stories.