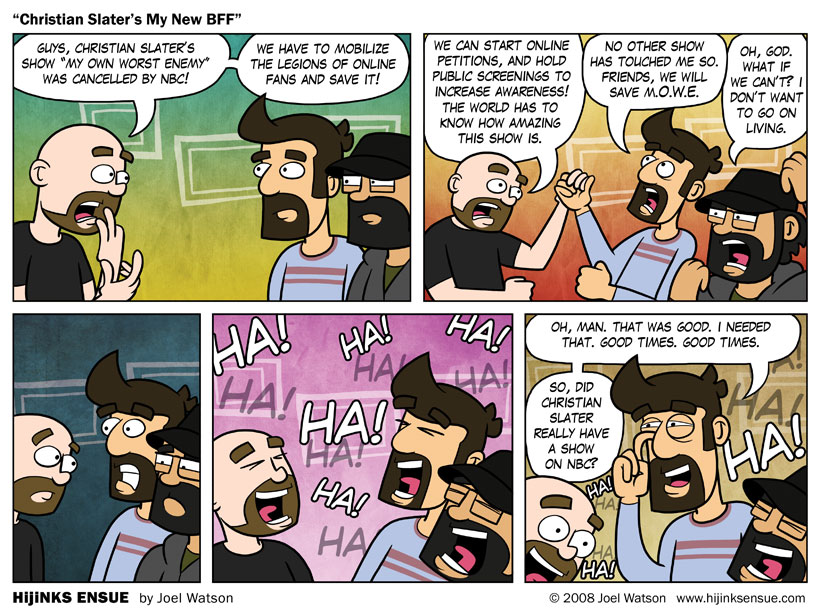 My television spies tell me that Christian Slater had a show on NBC where he played a Jekyl/Hyde/normal dude/super spy. Emphasis on “had” since it’s already been cancelled.

Who knows? It could have been a great show. I have no idea. Like so many other shows it was here and gone in a flash. The en vogue thing for networks to do now is ramp up a show, produce 6 episodes, air 4 of them then cancel it when the ratings don’t fare well against the Super Bowl.

This was a banner week for “shows that I don’t watch” getting cancelled. Lambs led to the slaughter since Monday include:

For those interested, I actually drew this comic. Like with actual art supplies that are in no way pixel based. Granted, I redrew it in Photoshop, but original art ACTUALLY HAPPENED. That’s unprecedented. You can see it HERE.

I was thinking about matting this with a print of the finished comic and putting it up on eBay. We’ll see if there is any interest in such a thing happening.

Posted in Uncategorized and tagged christian slater, my own worst enemy, nbc, tv.