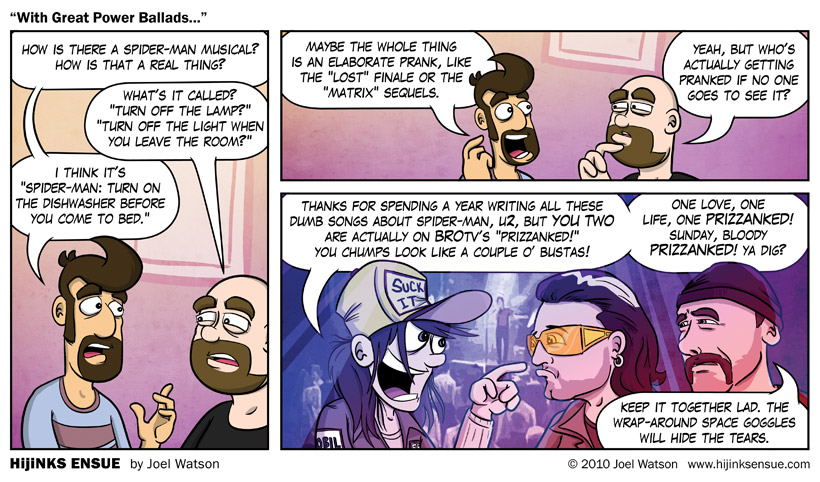 You might be saying, “But I’ve never seen the hit practical joke show Prizzanked on the BROtv network.” And you would be right to say that. Prizzanked actually airs on UPN, which stopped being on the TV some years ago. That’s part of why it’s such a good prank.

I honestly believed the Spider-Man musical, Spider-Man: Turn Off The Dark would never actually see the light of day. A series of financial setbacks coupled with the fact that (until now) the universe seemed to be governed by reason left me with the impression that such terrible nonsense would not make it to fruition. Hell, THIS VERY COMIC was founded on the idea that an emo Spider-Man was a mockery of the web-slinger. Now there is video evidence that such a bebangfaced, warbling wall-crawler does in fact star in a very real musical stage play that will be put on for actual human beings to… enjoy?

I guess the possibility still exists that on opening night the crowd will take their seats, the lights will dim, the curtain will rise and some jackhole in a trucker hat will run out and individually punch every person in the theater square in the balls.

Just for fun, here are a few more jabs from the host of Prizzanked to Bono:
“Uno! Dos! Tres! Fourteen! PRIZZANKED!”
“She want lemon? SHE WANT PRIZZANKED!”
“Where the streets have no name, except for that one street PRIZZANKED AVENUE!”
And finally, “Hold me, thrill me, kiss me, PRIZZANK ME! Chump.”

Comment Challenge: Rename Spider-Man: Turn Off The Dark
[Inspired by FB JustChristine who came up with Spiderman: Turn Around Bright Eyes]