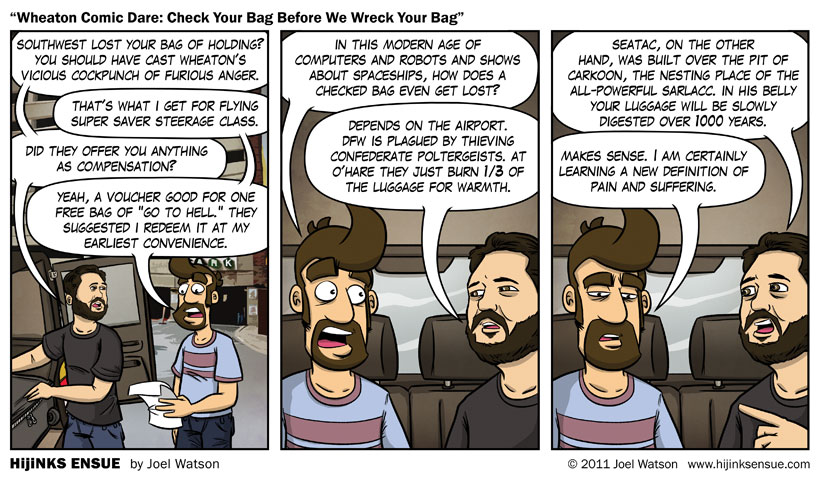 When Southwest called me to tell me they had found my bag I was in the back of Jason Finn‘s car with Wil on the way to meet Stepto and Marian Call. Jason and Wil were talking Mini Coopers and there was talk radio coming over the car speakers, so I pressed my phone against my right ear as hard as I could and plugged the left one with my little finger. I asked the woman on the other end of the line to repeat herself. “Shredded,” she said. “Shredded?” I replied. “Like we were a polar bear and your suitcase was a seal covered in maple syrup,” she responded.

They couriered what was left of my bag to my hotel later that night. From the extent of the damage I was completely unable to come up with a scenario by which this violation could have actually occurred. It hadn’t simply been dropped or snagged. It seemed as though some sort of manimal had clawed into (or out of) my small rolling suitcase in a blind rage. Can a creature truly hate a piece of luggage? I dare say it can. In my search for a reasonable explantation, Wil offered the Sarlacc pit theory and thus a comic was born. Later in the weekend I would prototype this comic in Wil’s copy of HE Book 2.

[Special thanks to Wil for contributing his first line in panel 1, a reference to his character in the Penny Arcade D&D Podcast.]

I toyed with the idea of continuing the Emerald City Comicon Sketch comics [Part 1 and Part 2] another day, but decided instead just to show you the rest of the sketches I wanted to share in this blog post. I will call this series “Sketches For Celebrities: Both Internet And Otherwise.”

Commenters: Feel free to offer up more examples of how and why specific airlines lose your luggage. Does JFK have to pay off the mob in “misplaced” golf clubs? Does Newark purposefully chuck your bags in the river to remind you not to go to New Jersey? How about some new slogans for Southwest? I like “Southwest: Hey whattayou Expect?” “Southwest: No Guarantees,” “Southwest: Come Fly The Functional Skies,” and “Southwest: This Whole Thing Is A Scam To Move Pretzels and Diet Coke.”