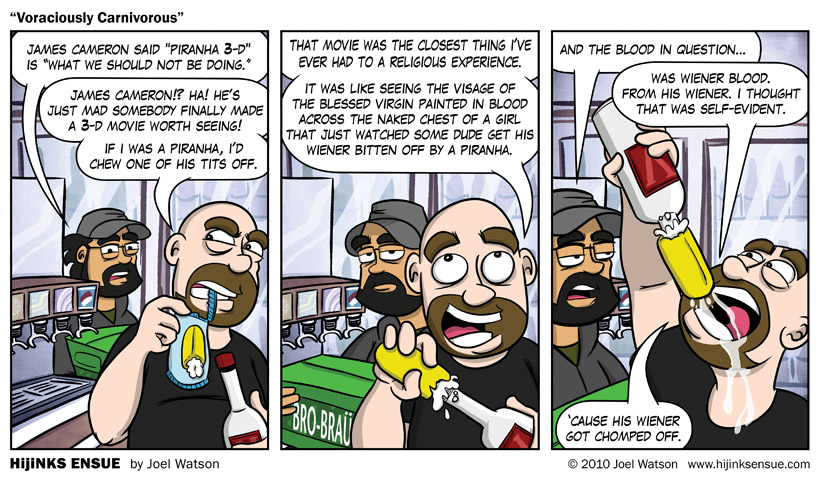 The next time you’re about to say “dick” or “cock,” try saying “wiener” instead. It’s a funny word. I bet you’ll get a little chuckle and some self satisfaction out of it. If you are having a hard time spelling the word, remember this simple rule: I before E except after C, or when sounding like “wiener” when talking to a hispanic gentleman.

Dallas Animefest is TODAY and all Labor Day Weekend!

Come see me, Shortpacked and Two Lumps (plus a bunch of cat-girls and such). We will be doing a Webcomic’s panel every day.

I haven’t seen Piranha 3D yet, but the real Josh did explain it as being something akin to staring into the face of God Almighty while an Angel sperms in your eye. James Cameron disagrees. Or perhaps he agrees completely but considers the God-face-Angel-sperm thing as a negative selling point. Either way it seems like the kind of thing you should see in theaters and with friends. I can’t image the fish-fueled-flesh-frenzy has the same impact when you’re at home alone, streaming it from Netflix on your Wii. Those hundreds of gallons of blood will seem like meer pints.

READER CHALLENGE: Any Fancy Bastard that provides video evidence of drinking Vodka (or some other type of booze) through a Twinkie filter (which must be crammed on the neck of the bottle) will get a signed print of this comic and another signed print of any comic of your choosing. Make this happen. Do it for me.
UPDATE: I’m going to limit this to the first 5 FB’s that provide proof. Otherwise it’s going to get expensive for me.

UPDATE 2: SOMEONE ACTUALLY DID IT!!! FB Jason did the Vodkawinkie and posted a video on Youtube. It’s a lot messier than I thought it would be.

UPDATE 3: Looks like Sean, Kristin and JonnyAce did the deed, and so did Paco! That’s all for the prizes but I still encourage you to experiment with this terrible idea. I had a thought, that maybe if you leave the Twinkie in the wrapper and open both ends it would create sort of a Twinkie filter straw situation. Anyone care to try it out?