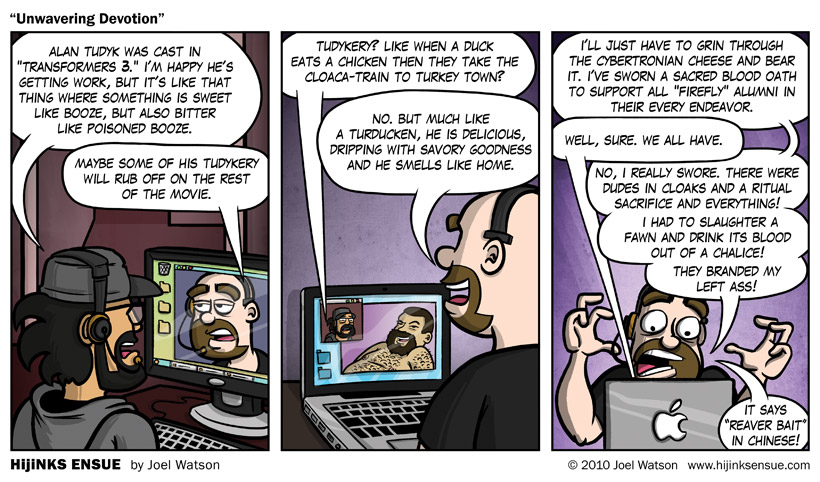 Josh doesn’t actually know what the character on his posterior really means, but if he shows it at the China Dragon Palace he gets a half priced buffet on Tuesdays. Which begs the question, why is he pulling his ass out in Chinese restaurants? 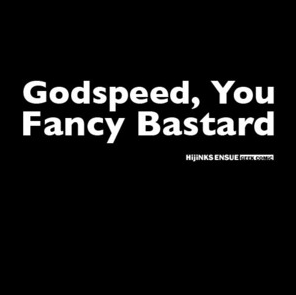 “Tudykery,” not to be confused with the similarly named, holiday time bird carcass nesting doll, is the quality by which Alan Tudyk makes things better (or at least tolerable) simply by being a part of them. This “human bacon bits” quality is the only reason I was able to get through the first few episodes of V and convince myself it wasn’t horrifically boring. Then they killed him off and the veil of mediocrity was lifted. How to do you make an alien lizard people invasion boring?

Still, there is the issue of “The Browncoat Contract,” by which I mean the obligation of the Firefly/Serenity faithful to give every show or movie featuring one of our bright, shiny stars a more than fair chance. It was this obligation that made me watch Nathan Fillion’s Drive. All 4 episodes of it. And Adam Baldwin‘s short lived The Inside. This same obligation caused many of you to tune in for Jewel Staite in SyFy’s Mothman. My condolences. The kind of made-for-TV scifi garbage that would usually require you to drink a gas can full of ether and Yoohoo to sit through must be given a free pass because the cute space mechanic is the one running from the CG monster that looks like it was created with a Speak’n Spell hooked up to a George Foreman grill.

Luckily for us, there is an escape clause. Once the Firefly veteran’s new show takes off, you are no longer under contract. For instance, both Chuck and Castle are successful shows. My super bonus TV watching ability’s are not required to save them from cancelation since “the normals” are watching it too.

The worst part about the Contract is that it forces me to watch shows that I already know are going to be awful  just so I can feel like I am doing my part to support the actors. Have you seen the promos for Summer Glau’s new show The Cape? It’s about a disgraced cop that decides to be Batman. Sounds cool, right? Well, he spends most of his time hanging out with carnies and magicians, so… just watch the promos. Holy lowered expectations, Cape Man!