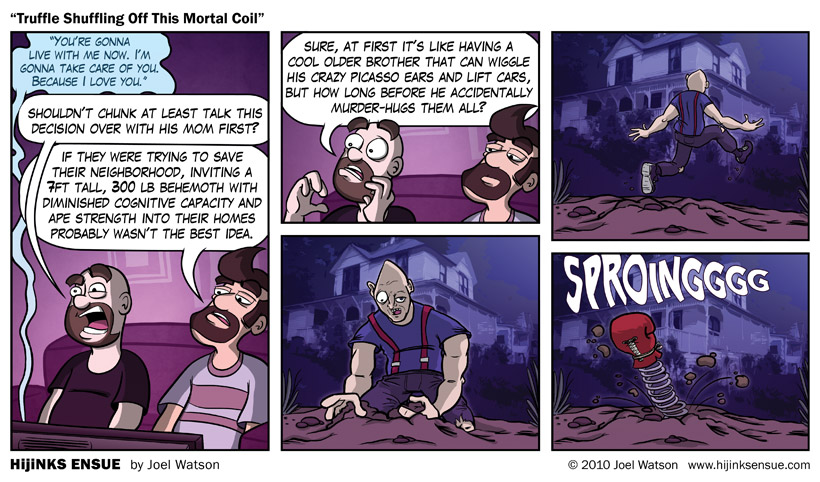 Blast you, Wheaton! Stop daring me to draw comics based on my own tweets! I will do it every time! I can’t… I can’t resist your eyes. Those wonderful eyes. Like two pulsars being extinguished in a pint of Guinness.

The Dallas Webcomics Expo is this Saturday!
Aug 21 in Plano, TX [MORE INFO]
With Something*Positive, Cyanide and Happiness, Gastrophobia, Complex Actions and more!

If any Dallas area Fancy Bastards want to have a meet-up after the show I am game. Respond with your intentions in the comments.

If you liked the 4 part “Under The Bridge Downtown” series of comics, you can get them as a really nice 11X14″ print for a limited time.

Concerning this comic, the point I am trying to make is that no matter which way you look at it The Goonies did not have a happy ending. Not in the slightest. Before we talk about Chunk’s fatal act of kindness towards a gentle but fiercely strong beast-man, let’s discuss the “resolution” of the main plot of the film. The kids go on an adventure to find “rich stuff” in order to save their shit hole town from being turned into a much nicer place to live. Blah blah blah, murderers, blah blah, pirate caves, etc etc and they end up with one marble bag full of pirate treasure (seemingly all precious stones) worth an indeterminate amount of money. And I don’t want to get off on a tangent here, but WHY DID THEY LET THE SHIP GO?! “You see this bag of pirate treasure? There’s like a million billion more pieces of it on that ship out there. You know that ship. The one we can see. It’s maybe a half a mile out, just drifting out to sea. Yeah, that’s the one. Should we… no, you’re right. Best to let Poseidon reclaim her.”

Anyway, so all they need to do in order to quash the “evil” developers plans to rejuvenate their cesspool of a seaside burg is shake their fancy bag of jewels in their faces and scream “Nah Uh! You ain’t gettin’ my town! I gots a bag of rocks what may or may not be worth enough to… purchase this town?” What was their aim. What was Mikey’s Dad’s next move? What amount of pirate treasure would cease the stop the urban planning machine once the wheels are in motion? Have you ever tried to get a permit to build a deck in your backyard? It takes like a month! Imagine the red tape that stood between Mr. Walsh and “saving The Goon Docks”. Insurmountable, I tell you! I assure you that despite having his contract torn up and thrown in his face, Mr. Evil Develop happily drove a bulldozer over the Walsh household the following morning with the shit-eatingest of grins on his face. Mikey’s dad was probably at the pawn shop trying to trade rubies and emeralds for modern American currency as his living room was laid to waste to make way for a Starbucks.

My second major problem with the end of The Goonies is (as illustrated above) the idea that Chunk would invite Sloth to live with them and, somehow through the miraculous grace of Space Jesus, would survive the week. Let me break this down for you. Not only is Sloth a monstrous baby-man with the strength of Sasquatch, but he was also raised by murderous gangsters. And by “raised” I mean “chained to the wall in a basement while his family committed murders in the home”. Just think about the violence he had seen in his lifetime. It’s not like the Fratellis started killing people the week before Goonies takes place. They were a family of life-long thugs and death-dealers. I’m sure murder was part of Sloth’s daily routine at a very early age. Monday: take out the trash. Tuesday: sweep off the porch. Wednesday: dig shallow graves in the woods. He was probably pushing past frost bitten corpses to get to the rocky road since he was eight years old. Just because he loves Superman and candy bars and has a few humorous catch phrases doesn’t mean he isn’t consumed by rage for the mistreatment he’s suffered at the hands of his family. This is not a dude you let sleep on your sofa bed, unless your sofa bed is also a mental institution.

Let’s say Goonies ends on a Sunday. By Tuesday the town lies in rubble, the hot chick got back with her douchey boyfriend and Sloth has bear-hugged the life out of Chunk, Chunk’s mom, Data, Mouth, the chick with the short hair and at least a half dozen other random neighborhood kids.

“Heeeeeyyyyy yooooooouuuu guys!“? More like “Hey, you guys are all dead and your crappy town has a bunch of new condos.”