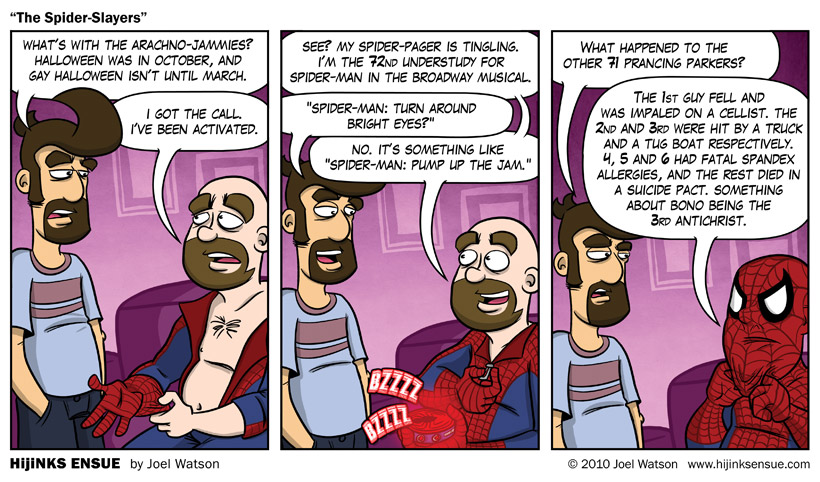 The book has to be to the printer in less than 2 weeks so if you want an Ultimate Fancy Edition AND you want your name in the book, you need to order NOW. I am also taking the UFE’s down from 200 to 150 signed and numbered packs due to slower than expected preorders and the impending deadline. Show your support for HE and preorder the shit out of Book 2! 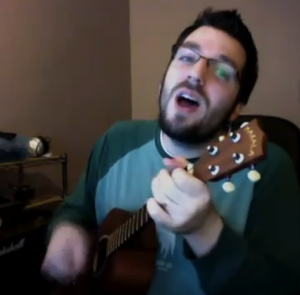 I got a ukulele for Xmas so I decided to make a video of me covering “Fake Plastic Trees” by Radiohead. I had fun making it and you should check it the heck out.

How exactly did Josh get to be an understudy for Spider-man: Take Your Boots Off, You’re Getting Mud All Over the Carpet… Turn Off The Dark? It turns out that everyone who has applied for a credit card, rented a car or eaten at a Coldstone Creamery in the last 18 months was automatically signed up in an involuntary, opt-out program known as J. Jonah Jameson’s Jr. Spider Brigade. You also get signed up if close out an ad on a YouTube video. It’s part of their revised EULA.

Anyway, remember that with great sequins come great responsibility and heed the wise, old saying, “Drop 3 or 4 guys from the wire rig, shame on you. Convince me to get in that same wire rig… can’t be fooled again.”

Seriously, the first Fancy Bastard that sees this musical is invited to come on the HE Podcast (via phone) and tell us all about it. Though I will insist that we refer to it as Spider-Man: Pussy Thwipped.

Posted in Uncategorized and tagged musicals, spider-man, spider-man: turn off the dark.