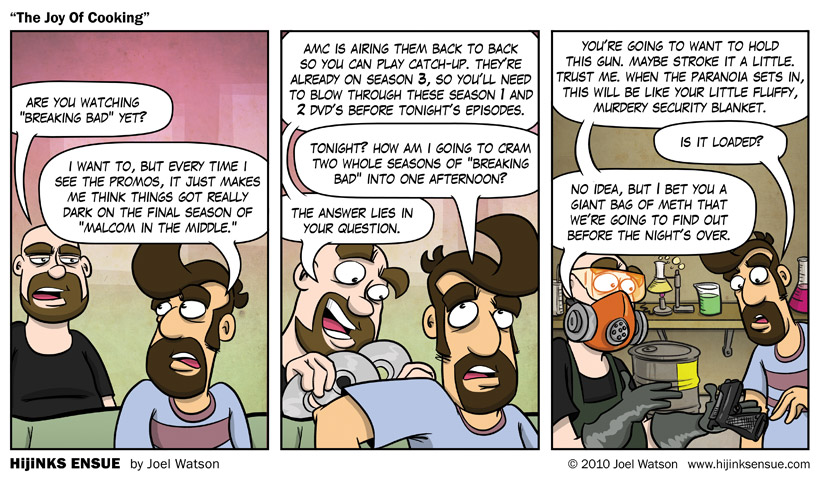 The book has to be to the printer in less than 2 weeks so if you want an Ultimate Fancy Edition AND you want your name in the book, you need to order NOW. I am also taking the UFE’s down from 200 to 150 signed and numbered packs due to slower than expected preorders and the impending deadline. Around 50% of the UFE’s are left. Show your support for HE and preorder the shit out of Book 2!

The situation of my new relationship with “the best show on television (from what I’ve been hearing from the entire world over the last year)” isn’t quite as dier as the one depicted in the panels above. I noticed a few episodes of Breaking Bad airing tonight on AMC and realized that, yes, they are running them two a night in order to allow Johnny Methhead come lately’s such as myself to catch up. Unfortunately the first episode I saw was the season 2 premiere, so I need to procure and speed-watch season 1 before I face the onslaught of 10 or so new episodes a week that are currently filling my DVR. I would ask your opinion of the show (feel free to post it in the comments) but there seems to be only one universal opinion towards the program. That it is (as stated earlier) the best show in television. I will do my due dilligence and report back to you in some sort of follow up capacity.

Keep an eye on my Twitter feed on new years eve as that we may record a new episode of the HE Podcast and we might just stream all or parts of it live on the internet. No promises yet, as plans are still developing.

I just realized that my next comic will be the last of 2010 and the last of a potential Book 3. Hmmm… how to go out with a bang? Murder-suicide? Wedding? Murder-Wedding? Suggestions are welcomed.