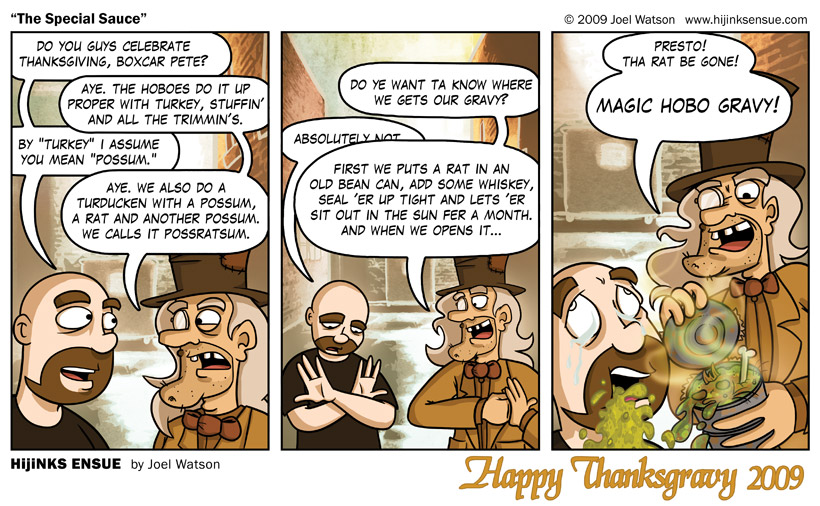 I just can’t seem to remember to cancel my Black Friday sale in the HE Store. I sure hope no one is in the mood for savings, because they could really take advantage of my forgetfulness. If someone wanted to know more about the fantastic savings or the new products (including the first ever HE Button Pack!) I suppose they could click HERE.

If you celebrated Thanksgravy this year I hope it was both gluttonous and slothful. Mind was both as is evidenced by my massive hangover. Well, I’m not sure if you call it a hangover when you’re talking about pie but you get my drift. Conventional wisdom would say you can avoid pain the next morning my alternating pumpkin and chocolate pecan pie every half hour. My experiments prove this to be false and delicious.

The more I learn about Hobo Thanksgiving traditions the more fascinated and repulsed I am. I mean I am literally dry heaving with Hobo holiday knowledge and cheer. Did you know the King of the Hobos pardons one “gravy rat” each year? It’s really just a symbolic thing  because as soon as the rat escapes seven or 40 hoboes pounce on it with rusted cutlery that once belonged to a Denny’s. They are a proud and majestic people. I also learned that you can make Hobo Rat Gravy by stuffing a rat into a milk jug, adding equal parts grain alcohol and windshield wiper fluid and fast-aging it near a burning trash can. After a few hours you just add coffee grounds to taste and serve over… well, everything.

You may notice that this comic is going live severely after Thanksgiving. Go ahead. Notice it. I won’t punish you. That’s because I chose to spend the thankful times with those which I am most thankful for: my wife and daughter. Now that we’ve all had enough of each other I can return to those which I am second most thankful for: you guys. You magnificent Fancy Bastards. You may be second in my heart but you will always be first in my something something.