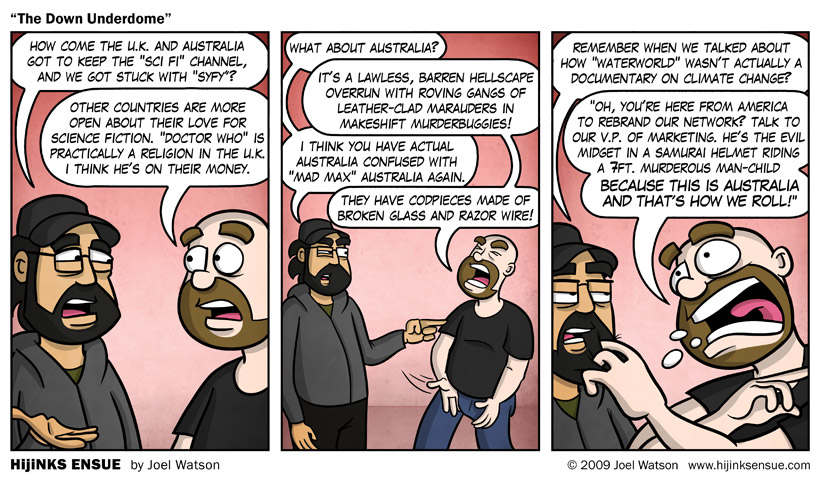 [The comic is a rough draft for now. I’ve been really sick all week and had another ER visit last night for an allergic reaction to something (don’t know what) that caused a crazy rash over most of my body. Yay for Steroids! The completed comic will be posted late tonight.]

I got the idea for this comic when I noticed a link to my “Edward” shirt coming from the Australian SciFi Channel Blog. I realized that they had never made the ugly transition from properly named television network to Polish venereal disease like their US counterpart, SyFy, had. Further inspection revealed that all worldwide SciFi affiliates retained the original nomenclature. I guess American’s are the only ones that need to “imagine greater,” “unthink different,” or “expect disappointment” or whatever their new slogan is.

SPEAKING OF THE EDWARD SHIRT
Thank you so much to everyone that has purchased one. It is officially my fastest and best selling product ever. I received a sample print today and I think they look great. They will start shipping later this week. I don’t want to say too much, since not everything is finalized yet, but I was contacted by Olmos Productions last week regarding the shirt. Expecting a swift cease and desist order I was overjoyed to learn that they liked the shirt and were interested in working with me on a project or two. More details to come as things unfold.