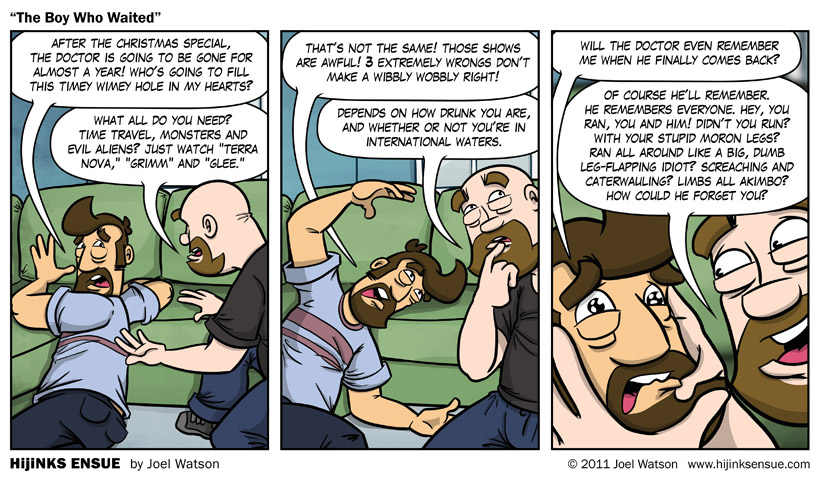 In honor of The Doctor and my current allergy-related headsplosion, I am drinking a cocktail of Dayquil, Sudaphed, vodka and orange juice. I call it a Sonic Screwdriver*. I can’t say I’m happy that The Doctor is leaving for so long, but I would rather them make a great series than rush to meet some arbitrary deadline. Plus, The Doctor always comes back eventually.

My daughter is starting to figure out that Santa Claus isn’t real. [SPOILERS] Recently she’s said things like, “I bet scientists don’t think that Santa can really see everyone all the time,” and “I don’t think Santa’s reindeer can really fly. I bet they just walk everywhere.” I think I’m going to start telling her that Santa is and has always been a lie, because it’s The Doctor that brings her presents every year. Then we can leave fish fingers and custard on the fireplace for him on Christmas Eve.

COMMENTERS: Mofftatt said the incredibly long Doctor Who hiatus (Doctor Whiatus) is due to his feelings that new adventures in the blue box should start in fall. In this age of DVR’s, Netflix streaming, and all manner of time-shifted TV, does any of that really matter? Would we be better off if series were released all at once or in chunks, 6-10 episodes at a time?

Also, what are you doing to cope with the year long break from Doctor Who? Any shows taking its place? What about other activities? Do you go… outside? Do you know where outside is? Are their people out there? Please don’t tell them where I am.

*Seriously guys, do not try this.