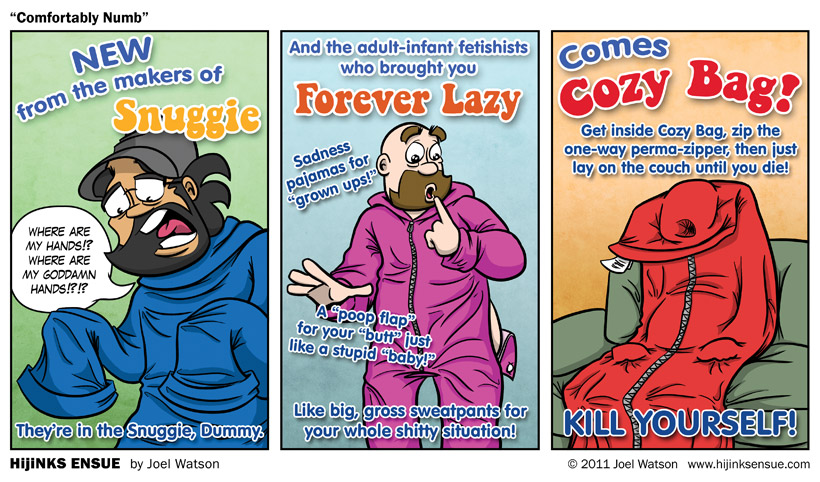 There is a whole class of “gift” one may receive around the holidays that says, “Hey. I don’t really know you that well, nor do I care to. Here’s some bullshit I paid money for.” The Snuggie (the blanket with arm holes) and the Forever Lazy (the blanket you wear like a shame-suit while you go tailgating or play Wii) have the distinction of falling not only into this category, but all into the “Thing that solves a problem that isn’t really a problem at all and actually makes trying to solve that fake problem more difficult that using the thing you already have or just ignoring it outright” category.

These types of items flood the stores around December as if to say, “SHOPPING IT TOO HARD! BUY LIKE 40 OF THESE AND YOU’LL BE DONE AND YOU CAN GO HOME AND HATE YOURSELF!” They also play into the worst part of Christmas and other gift-giving holidays: the idea that buying something, ANYTHING, for someone is a requirement. Nay, an obligation.

I have successfully managed to strategically distance myself from most of my family in such a way that I A) Do not receive any bullshit X-mas trinkets, and B) Do not have to purchase any such bullshit for others. I buy gifts for my wife, my mother, my in-laws and my daughter. I know those people and I have a pretty good idea of what they like. Often that thing does not cost very much, if any money. My in-laws certainly don’t need me to spend money on them. They have plenty. We give them gifts they wouldn’t think to give themselves or something you can’t buy in any store. With my mom, it’s more about giving time, memories, etc. For the kiddo it’s about treating her to a few special or larger items than she would normally get during the year while simultaneously instilling the value of giving to others in her. Every year she has to fill up a box (sometimes 2 or 3) with toys that she doesn’t play with any more to donate to needy kids. This year she is doing that and using her own money from chores to purchase a new toy from the store to donate.

I say all of that to say this: When you see a commercial that starts with “Doing [insert extremely easy, every day task] is hard! Don’t you wish there was a better way?” DO NOT BUY THAT THING! No one wants it. No one needs it. Stop buying stuff for people just because you think you have to. Make something. Frame a photo of the best day you ever had with that person. Take them on an adventure. Knit a freakin’ scarf. Give them something that doesn’t have a direct monetary value and isn’t available at Best Buy. Otherwise you might as well just write how much cash you were intending to spend on a piece of paper, give it to the other person, take their slip of paper and work out the change owed.

I should probably mention that NONE of the above logic applies if you are giving gifts from The HE STORE or Sharksplode. Seriously. Go buy that shit up.

COMMENTERS: Whats the worst “Here’s some bullshit” gift you have ever given or received? One time I got a set of pocket knives (a SET of pocket knives… like 6… as if you would ever need more than one) with the last 6 U.S. president’s faces on them. If that doesn’t say “I have no idea who you are. Here, take this,” I don’t know what does.  ALTERNATELY: What’s your favorite “As Seen On TV” product to hate? Mine is the “Make a giant cupcake” pan whose commercial starts out with “Regular cake is boring…” NO IT IS NOT. FUCK YOU. CAKE IS AWESOME.