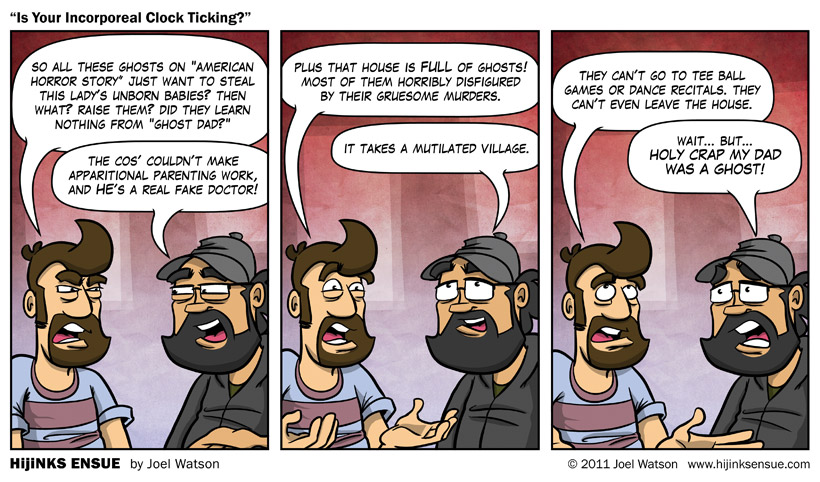 Of the recent slate of new shows, I’d have to say American Horror Story is probably my favorite. That title comes with an asterisk, however. The creators of the show, are also the creators of Nip/Tuck and Glee. Their pedigree screams, “GREAT CONCEPT! GREAT FIRST SEASON! THEN EVERYONE STARTS ACTING LIKE CARTOONS AND THE WHOLE THING TAKES THE SUCK TRAIN TO SHIT TOWN FOR 5 MORE SEASONS!!!” AHS has been showing some of the Nip/Tuck stink since day one (in that people, haunted or not, continually behave in ways that human beings would never behave, so much so that it begins to distract you from the story), but it has managed to balance that out by also keeping the plot moving and continually surprising the viewer.

It also suffers a bit from having no likable characters. Not one. Not one who is living, at least. Some of the ghosts are sympathetic, but they also suffer from being extremely one note as ghosts are wont to do. I get the idea that being stuck between realms with unfinished business might lead one to having a very singular focus, but eventually the ghosts constantly chanting their one desire over and over gets annoying. Add to that the fact and all of the living human characters are also dumb as tombstones and things get more annoying still. The ghosts are the only ones that seems to have understandable motivation. “I was murdered and I am pissed about that HAUNT HAUNT HAUNT” is more relatable than “If we move out of this crazy murder house where ghosts keep trying to murder us with ghost murder we would be upside down on the mortgage.” That said, these are flaws in what is still a VERY compelling show. Jessica Lange just steals the screen every time she’s on it. The whole thing is almost worth it just for her performance. I give it a strong recommendation, especially considering this week’s episode, which was a real game changer for the series. Just as it seemed like they had already run the entire course of the premise they have found a way to keep the family connected to the house for the foreseeable future, which is not contrived or lazy.

I do kind of want to see Quinto and the other ghost-gay get the babies. My Two Ghost Dads would be a fantastic phantasmic spin-off.

COMMENTERS: I was a little harsh on American Horror Story the first time around, but now I’ve warmed up to its cold, dead, etherial fingers. Have you given it a shot? What do you think? NO SPOILERS IN THE COMMENTS PLEASE, considering the severity of this week’s episode.