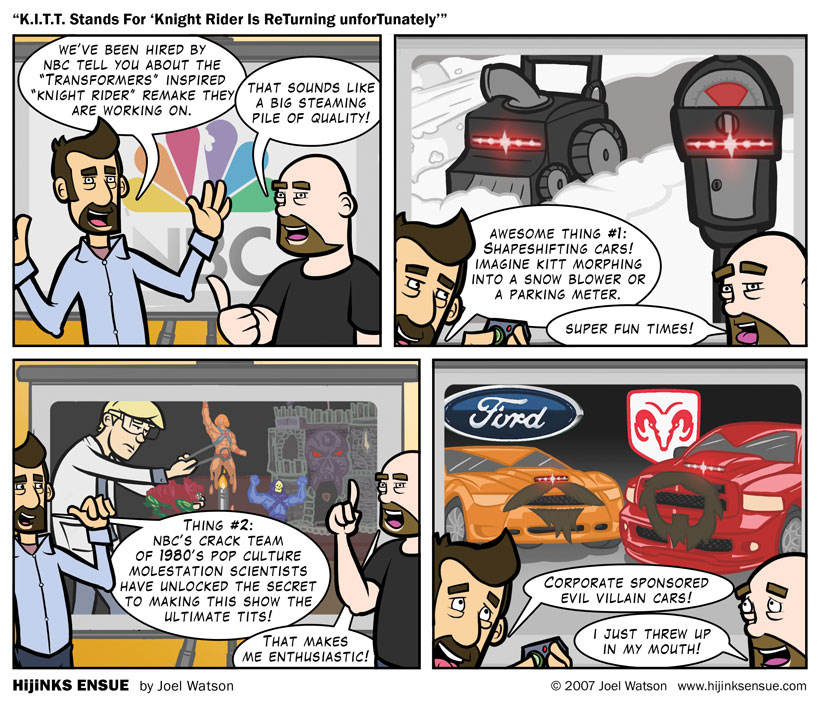 Or possibly “Knight Rider‘s Not Unix.”

Gnu joke… Anybody? Oh well. It actually stands for Knight Industries Two Thousand. Yes, they spelled out 2000 to make their super R.A.D.D. acronym work. Back in the 80’s, the year 2000 was believed to be so distant in the future (nearly 20 years) that it must be part of a fantastical future scape rife with unimaginable wonders like sentient talking cars voiced by middle school principals. So any time something in an 80’s movie or TV show was supposed to be futuristic, or a thing that doesn’t normally talk had to talk they would tack a “deuce triple ought” to the tail end of it.

When I first read that NBC was bringing Knight Rider back to the smallish screen, I could only think of T.K.R.Team Knight Rider (that’s to those of you outside of the T.K.R. Fan-Fic community). Maybe YourTubes has some Team Knight Rider videos you can watch to better understand why even still I quiver in a cold sweat at the mere mention of teams or knights or anything riding anything else. Just look at the cast list. Keep in mind the names on the left are supposed to be the actors’ REAL names:

This is either the Team Knight Rider cast or the cast of “Backdoor Glory Hole Creampies IV.”

NBC RESPECTS ME AS AN INTELLIGENT CONSUMER!