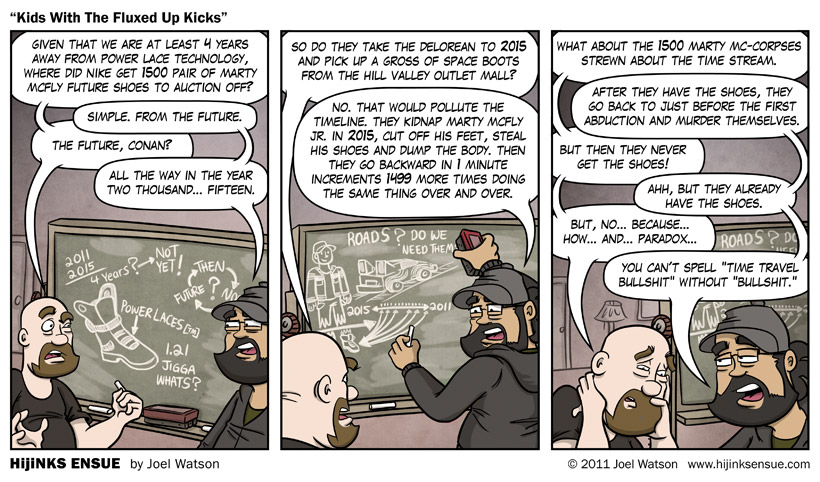 The year 2015, otherwise known as THE FUTURE, is rapidly approaching and before it gets here I have two questions: 1)What exactly happens to us as a society in the next 4 years that leads to flying cars, hover boards, dustless paper, advanced de-aging treatments and simultaneously gives us shittier TV picture quality, sub par vector holograms, crappy cell phone/sunglasses headsets and gets us back to using fax machines in nearly every room of the house? I can only assume we discover cold fusion and, on the same day, a techno-organic virus wipes out at least half of all technology created after 1994.

2) Sure the Nike Air Mags worn by Marty McFly in Back To The Future II SEEM really cool in the context of the film, but are we forgetting that these were NOT Marty’s shoes? They were Marty McFly JUNIOR’s shoes. And Junior was, to use the future parlance, a butthead. Since when does the biggest dweeb have the most awesome shoes? I foresee only two explanations. Either Mags were cool a few years prior and he is the one kid that’s all “Dudes! I finally got me some Mags! Can we all be bros now?” and they’re all “Mags are SO 2013, McFly, you insufferable butthead.” OR the concept of power laces was invented to help kids with poor motor control due to birth defects caused by your father probably having banged his own mother in the past thus causing him to be HIS own father and both your father and grandfather.

I mean, come on! Marty Sr. looks and acts exactly like… Marty [himself, the strange sea-faring drifter from 1955] and nothing like George McFly. And you know Lorraine was harboring some feelings for her childhood fling when she named her child after him. The fact that both Marty Jr. and his sister don’t just resemble but have THE EXACT SAME FACE as Marty Sr. proves that gene pool has a nice layer of paradoxical incest-algae floating on top of it. Who knows? Maybe it all really started when Marty banged some 1850’s prostitute while rescuing Doc from the old west who turned out to be his maternal great grandmother.

[DOCTOR WHO SEASON 6 SPOILERS] Time does crazy things to the in vitro human body. Hell, Amy’s and Rory’s kid turned out to be half Time Lord just because they got busy inside a TARDIS. [/DOCTOR WHO SEASON 6 SPOILERS] Can you imagine what Marty’s constant time stream surfing has done to his poor man-onaise? He probably ejaculates a purple florescent magnetic gel. Speaking of Time Lords, I was going to call this comic “Wibbly Wobbly Marty Warty” but then I realized it sounded like I was making fun of Michael J. Fox. If you laughed at that last sentence (as I did), you are terrible.

COMMENTERS: When I was a kid I said a little prayer each night that EVERYTHING shown in BTTF2‘s 2015 would come to pass. Now I just pine for hoverboards. What future tech from a movie or TV show were you really hoping we would have by now? What are you still holding out hope for?

Posted in Uncategorized and tagged back to the future, movies, nike, nike mags, scifi, tech.