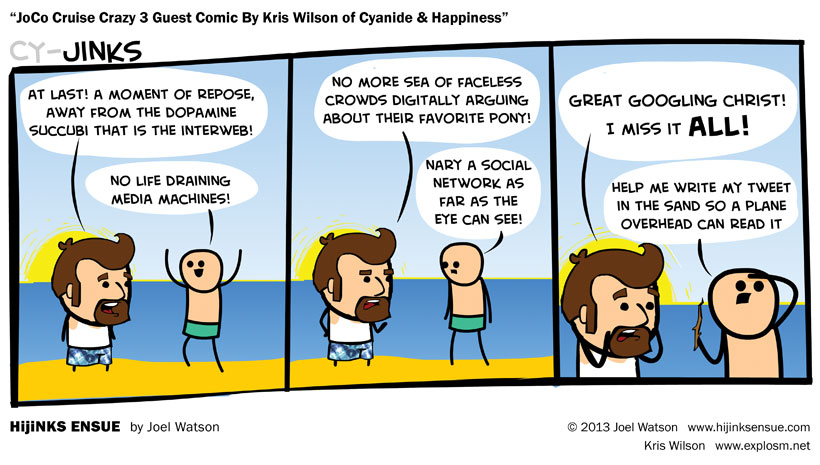 JoCo Cruise Crazy 3 Guest Comic Fortnight makes a detour to drop off a nondescript duffle bag at an unmarked port with this comic from Kris Wilson of Cyanide And Happiness. Kris did a guest “Cy-Jinks” comic for the last JoCo cruise. In the blog post for that comic I mentioned that Kris and his CnH cohorts (one of whom, Rob, is on the boat with me right now, and pictured above in shape-figure form) were in talks with Comedy Central to produce an animated show on the actual TV. I the last 12 months THINGS HAVE CHANGED. They walked away from the deal in favor of producing an animated series (and much more) on their own. This is super exciting, not only because my friends are going to get to make a show on their own terms, and I’m going to be contributing in some capacity (more on that later) but also because of what it means for independent content creators and what is now possible in terms of dealing directly with your audience sans middleman. I won’t be able to update while I’m on the boat, but If you follow Kris on Twitter I bet he’ll give you a link to their Kickstarter this week, maybe early next week. Fun, exciting times are ahead!

Kris was here in Dallas all last week and we had a good old fashioned sleep over. We giggled about girls, watched scary movies and ate too much junk food. Which is to say we wrote a bunch of comedy for internet-TV-type-shows and made some comics. Kris is that person for me that completely unclogs my creative tap. He’s a plumber for my stopped up mental drain. He’s the toilet snake for my haha comedy pipes. He’s the metaphor to my some other thing whatever. If even half of what we’ve been talking about sees the light of day in the coming year, you’re REALLY going to enjoy it.

So today would be day four of the cruise. I’m guessing the barnacle related death toll is somewhere near an even dozen. I’d also expect that we will have accidentally left somewhere around 1/4 to 1/3 of the passengers on various tropical islands totally by accident. Those of us who are left pretty much have free reign of the boat. It’s my turn to drive today! I should be a very good cruise ship driver because of that time I road the flume ride at Six Flags. Just raise your hands and scream, right! Don’t forget to flip off the camera when you pass it. Oh, man what a good joke. [SPOILERS: I crashed us into a whale. Half of the remaining passengers fell directly into the great beast’s sea-mouth and were swallowed whole. A group of individuals led by one of our Somali pirate line cooks has taken a life boat out to try and reach an armistice with the whale. DOUBLE SPOILERS: They sailed directly into its mouth as well. There are 60, maybe 70 people left on this boat and NONE of them know how to make room service. Things are getting dire and late-night club sandwiches are going UNMADE AND UNEATEN!]

COMMENTERS: What was I talking about? No idea. Ok, give me your best/worst vacation stories. Bonus points of there were shenanigans involved.