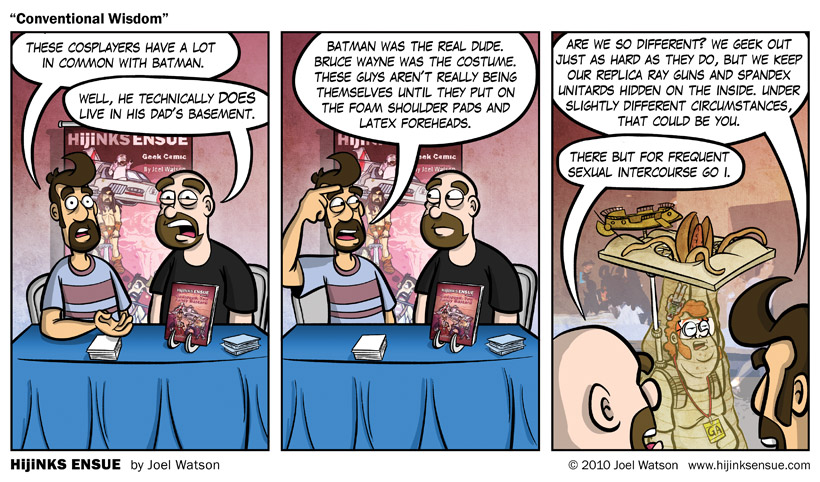 Dallas Comic Con was a blast! I met a bunch of local Fancy Bastards and hopefully brought a few more into the fold. Josh, Eli and Alex stopped buy on Saturday to help man the booth and make fun of people in poorly constructed costumes.

When the average geek sees a really well crafted comic-con costume, like a Hawkgirl with a hand stitched leather mask and real feathers in her fully articulated wings, they will usually respond with reverence and appreciation for the fine craftsmanship. Perhaps in the same way normal people would regard a hand made credenza or a stupid boat or something. The person wearing the quality costume gets a free pass to play dress up in public and not only get away with it, but get respect for it.

However when the average geeks sees a shitty costume (I’m talking duct tape, kitchen gloves, rough cut, poorly stitched fabric, off the shelf plastic Darth Vader helmets with built in voice changers, etc), the admiration plummets to complete revulsion. All of a sudden you aren’t just critiquing the poor handy work, but you’re making snap judgments as to whether or not the offending cosplayer really deserves to be sucking down as much oxygen as he is. I mean that’s perfectly good air that us decent, functional people could be enjoying.

I think it’s a bit of a double standard but the geek world is laden with hypocrisy. I say of the gentle cosplayer, never ever pity them. For they are the bravest geeks of us all.

COMMENTS!
Share you best or worst cosplay story. This could be a costume you made or just one that you saw at a party or a con.

HE WIKIPEDIA ARTICLE
There’s a new HE wiki article and it’s in danger of being deleted if it doesn’t get some citations and notoriety added. If you would like to help, please check out the HE FORUM post on the subject.