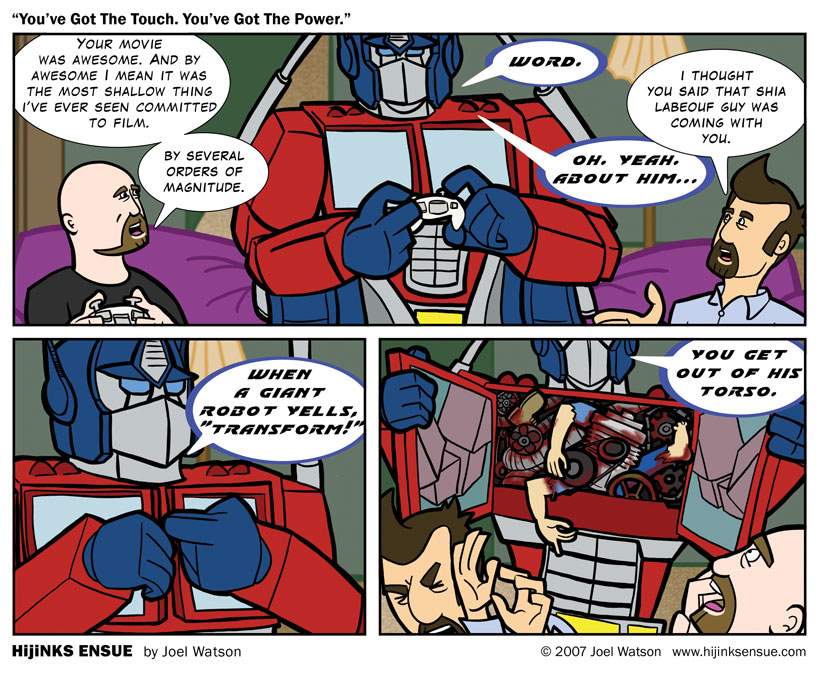 I asked Josh what he thought of the Transformers movie. He said, “Holy shit! It’s one of my top 10 favorites! The final battle with Unicron was fucking life changing. I mean c’mon. Eric Idle as Wreck-Gar!? Fuck Yeah!”

His verbatim response is chronicled in the adjacent panels. Also, the gear-mangled, chewed-up remains of one Mr. Lebeouf is a far less desirable prize to keep in one’s chest than the Autobot Matrix of Leadership.

I haven’t seen the movie yet, but I hear an Xbox-ticon rapes some dude’s face off. So there’s that.

This comic was originally going to feature Spike (of Spike and Sparkplug fame). Perhaps you need to read up on the Witwicky family. Child protective services should have removed Spike from that household. Not only was he a teenager forced to work on an oil refinery platform, but he was encouraged to spend his free time embroiled in a cybernetic civil war for galactic conquest. They eventually gave him a job on the moon. I shit thee not. The moon.