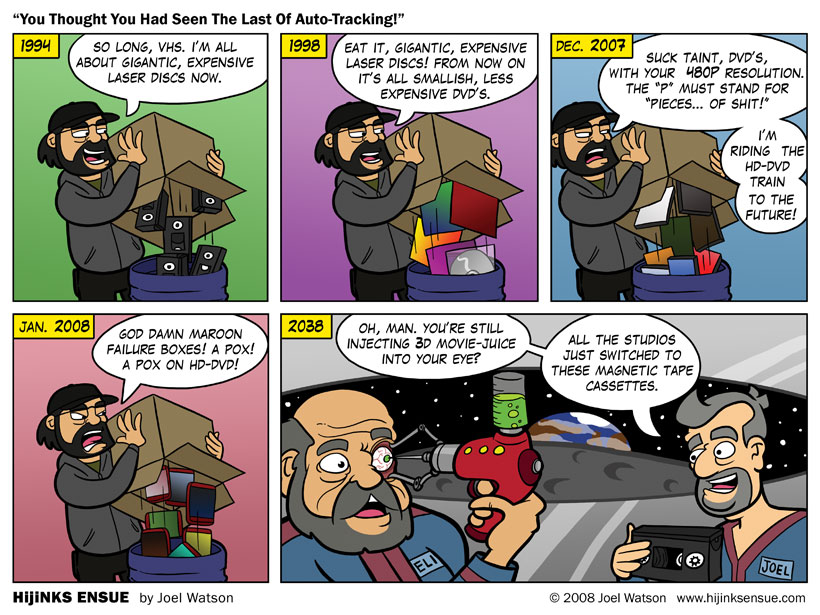 Afterward they develop brain parasites that just tell you the basic plot of a movie in a conversational manner.
Not to beat a dead digital video format horse, but this beating stick has a few more whacks left in it (and its got a nice weight… feels really good in your hand.. ya know?). Yesterday, Netflix announced a $100 set top box that (with at least a $9 monthly plan) will let you stream 10,000 movies and TV shows. I know other services exist with this same technology, but not at a $100 price point, Netflix’s catalog and Netflix’s installed user base. You see, if you are already a Netflix subscriber you are already paying for this service. You just need the box. That’s fuck-tastic. I’m going to eBay most of my DVD’s (the one’s I don’t care about at least) and get one of these.

I might have told this story before, but in 2001 or so my friend Farris G. said, “why can’t we just subscribe to a service that has every episode of every TV show ever on demand? You wouldn’t need cable or satellite of DVD’s or anything.” Now, he was making this argument almost solely based on a desire to watch “Quantum Leap” reruns at a moment’s notice, but his point was valid. 7 years later we are extremely close to that ideal.

As I get older and life gets busier and more complicated, I care less and less about owning a physical representation of my audio and video media. I find DVD’s expensive and cumbersome (how’s that for jaded?). I’m sick or storing them and sick of paying $20 for them when I typically watch them 0-1 times over their life span. I don’t care about special features or commentaries any more. I am a perfect fit for a service like this.

I think we all realize that Blu-Ray is a stop gap to all-digital distribution. I predict it will have the shortest overall lifespan of any major format before it. The Netflix service isn’t HD yet, but it will be. And the box they are selling today will be firmware upgraded to accept HD content.

Give me a box that can stream any movie or TV show, and a wireless internet iPod that can access any song instantly and I will most likely stop trying to “own” my files. Sure, I’ll but the LOTR trilogy in the highest definition possible, and certain albums I might want in lossless format, or buy just to support the artist, but for the most part I just want to be able to call up an episode of “Arrested Development” from any TV in the house without having to go the store or fumble with a disc.

Speaking of, I’ve been doing just that on Hulu lately as I draw and it’s pretty fantastic. I also watched “Dave Chapelle’s Block Party” this morning… instantly, and for free. I highly recommend both the service and the Chapelle. The movie was very fun and uplifting. He’s just a normal guy living an extraordinary life.