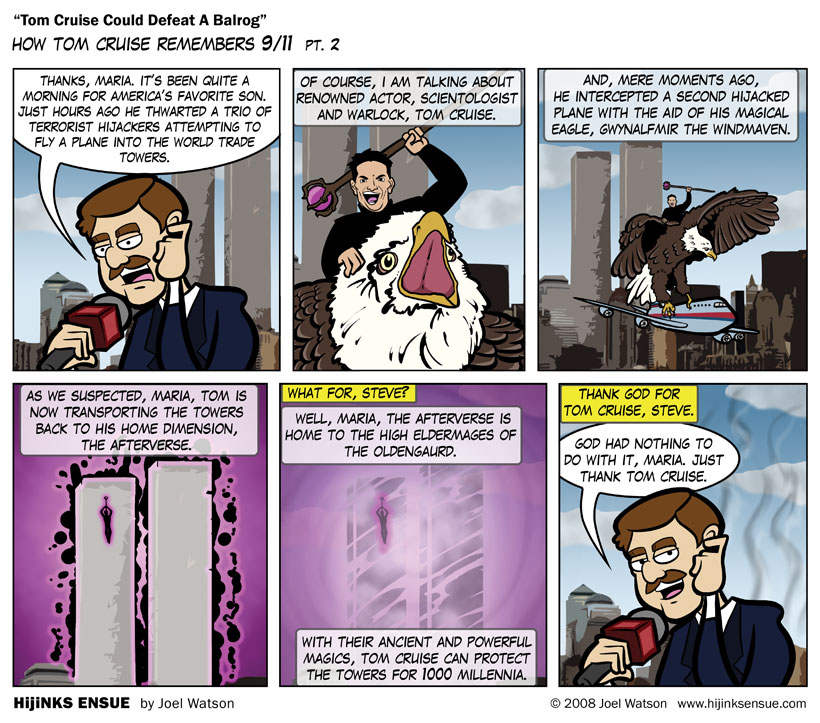 I think I’ve pretty much said my piece on Tom Cruise, so I will dispense with any additional rant and simply continue with the story of how he remembers saving New York city on September 11th, 2001.

I’m really having fun exploring the idea that Tom Cruise has basically every magical or super power and can recall them at will. I also like establishing that he is simultaneously an ageless wizard, a crime fighter, a Christ figure and a douche barrel of inordinate magnitude.

I realized when writing this story that I was going to have to account for where the towers went (because even Tom knows they aren’t there any more). In an earlier draft Tom Cruise lets out a Banshee-like wail and reduces the towers to rubble himself. He does this to remove the temptation for future terrorist attacks. He was also going to slide into NY on an ice bridge a la Iceman, but there are only so many panels. And, really, you can’t get any more pimp than a giant eagle. You pull up to a club in a magical eagle and they let you right in. Oh, and I realize in panel 3 Tom Cruise would have to be like 40 ft tall to be proportionate to the plane. That’s not a mistake. He’s just that powerful.