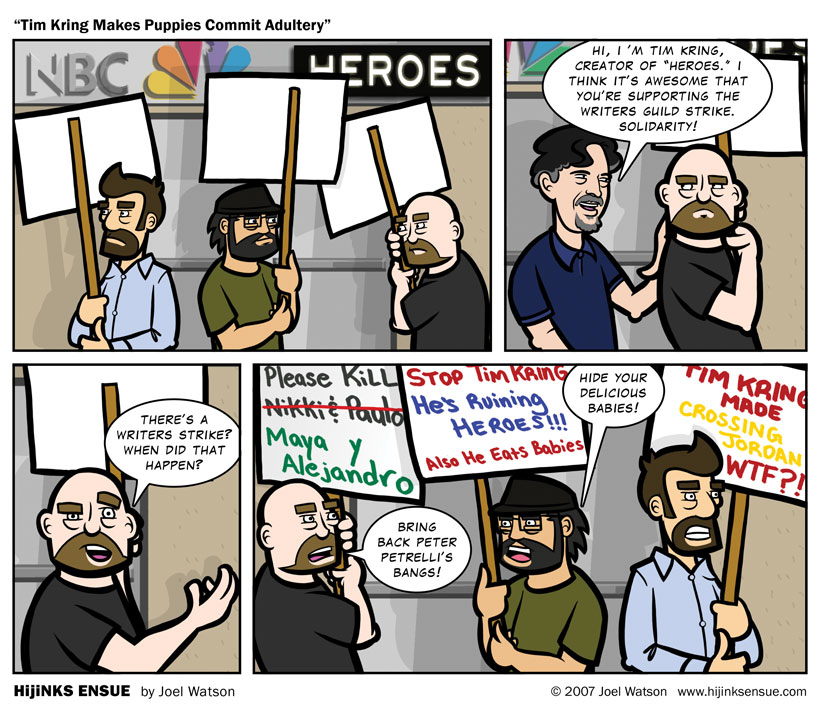 Somehow “The Writers Guild” evokes imagery of shadowy figures in heavy velvet cloaks gathered around mammoth stone tables to perform sacred blood rights and cast runes. This ancient band of clandestine scribes is now on strike. They’ve struck… stricken… whatever. To be fair, the studios should just agree to remove all writing from DVD’s and downloaded shows. Heroes season 2 would be unaffected. O00hhh. Burn.

Today’s comic deals with the declining quality of the television show Heroes and the merits of its “creator,” one Mr. R. Timothy Kring. I’ve decided season 1 was a fluke. Season 2 is a testament to how little this guy understands about comic books or geekery in general.

It turns out Tim Kring time traveled forward, read this post, went back in time and apologized for his transgressions. That’s certainly a different approach than we get from Lindelhof and Cuse. They are more of “Fuck off! Let me see you make a better show! Dick holes!” Where as Kring is taking the stance of “yeah, I really don’t know what I’m doing. You guys got any ideas? Where do you post your fan fics? Oh, here they are…. why are all the dudes gay?”

You can download today’s comic for your Webcomic Remixing delights here:

Have some fun with it and email your entries to comics (at) hijinksensue (dot) com.

I moved the remix entires here and gave them their own category.