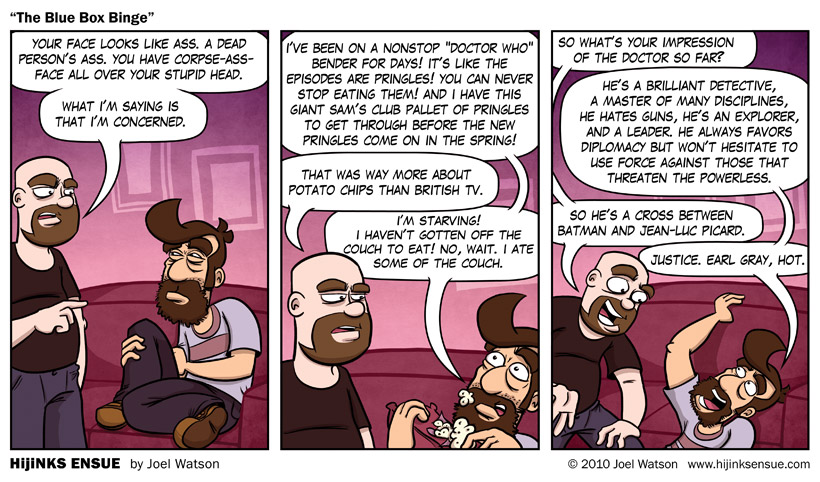 There are less than half of the 150 UFE’s left and I really need to sell ALL OF THEM to get the print run covered. Show your support for HE and preorder the shit out of Book 2!

Episode 75 of the HijiNKS ENSUE Podcast is live! It is a doozy if I do say so myself (spoilers: I do).

Two Doctor Who comic in a row!? Unprecedented! I have been shotgunning Doctor Who episodes 5 or 6 at a time for the last 3 days and the experience has definitely taken it’s toll. I haven’t shaved (though I rarely do), bathed or fed myself since 2010. I only respond to the cries of my wife and daughter with the occasional guttural “yawp,” and I’ve gone completely insane due to lack of sleep (much like Dalek Caan when he flew directly into The Time War). I am only 2 or 3 episodes from the end of the 10th Doctor. After that I can either catch up with 11 or go back and watch 9, and the first 2 seasons of 10. Either way I have dozens of hours of geeky enjoyment ahead of me.

I came up with the idea of this comic while trying to think of a way to describe Tennant’s Doctor to my wife. I stand by the Batman + Picard assertion. I have also worked up a theory that 10 doesn’t actually regenerate due to death, but rather due to suppressing so much god damn pain and rage over the years. He’s constantly putting on a happy face when you know the weight of the universe is burdening his multiple hearts. The regeneration process is like a Time Lord soul-colonic.

Any Who fans should check out these Doctor Who nesting dolls by Molly Lewis. Simply fantastic.