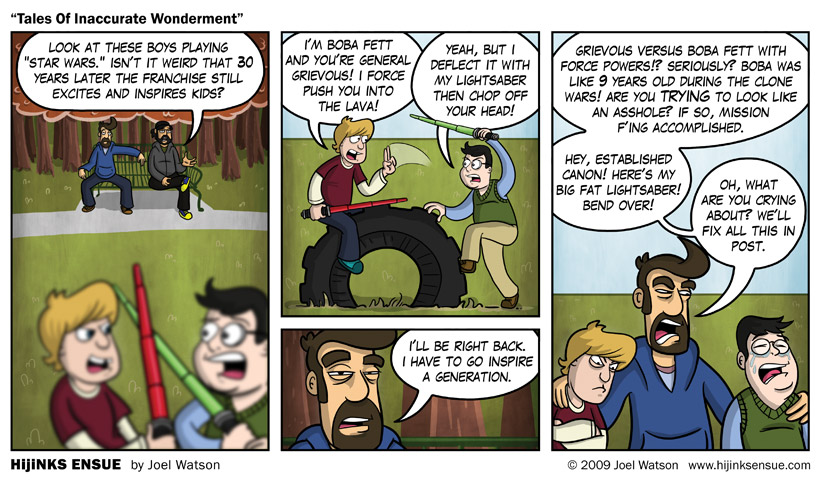 “Now aren’t we ALL having more fun?”

[@wilw submitted this comic to Reddit. Cross that one off my “geeky thing to accomplish before I die” list]

This comic comes from an actual occurrence at an actual shopping man in actual America. The kids’ dialog is almost entirely lifted from the real life youths I observed. It just struck me as odd that Star Wars is alive and breathing in the lives of these pre-adolescent kids. I assume this is mainly due to The Clone Wars animated series (which I rather despise for being as boring and empty as the prequels).

Return of the Jedi came out in theater’s when I was only 3, and thus the only Star Wars I remember experiencing first hand was The Ewok Adventure (which came out a year later). I had nightmares about getting trapped under a frozen river for… well essentially forever. My point is where as I was at least alive during the decade that the final movie of the original trilogy was released, the Star Wars franchise is probably having larger impact on the lives of kids that were born 20 years after me. Practically as long as they’ve been alive Lucas has been pumping out prequels, CGI movies, cartoon series, toys, costumes, video games, etc. And don’t forget the Internet. THE INTERNET! When a kid signs on to the damned Internet these days they have to select “Star Wars” or “Everything else.” Even when they select “Everything Else” they still get a pop up of C-3PO saying “I have a bad feeling about this.” every 30 seconds.

I’m not complaining. As dry as the franchise is now it still gets kids interested in Sci-Fi and boost their imaginations. I guess I was just surprised at the realization that “my Star Wars” was 30 years old and “their Star Wars” was still being born.

NOTE: This will be the last comic this week so I can catch up on Artist Edition sketching and shipping.